I like to consider myself a world traveler. I’m not going to pretend I don’t like home; coming home after a long, and sometimes uncomfortable, trip can be super relaxing. Sleeping in my own bed, taking a warm shower, changing my clothes, eating familiar foods, etc, is sometimes exactly what I need. But, I also love to go to different places around the world.

I love seeing the locals, what they wear and how they act. I like trying some of their foods (although I’m vegetarian, so all food tastes are within that constraint), and I like seeing how they live. Depending on where I’m going, I’m also going to be interested in other things.

If I’m going to someplace in Europe, then I’m going to want to visit museums, castles, and famous neighborhoods. If I’m visiting Hollywood, I’ll want to go to the Griffith Observatory to see the Hollywood sign and to see the Hollywood Walk of Fame. For my most recent vacation, I went to Kenya. And when I go to this type of African country, you can bet I’m there to see animals.

But I’m getting ahead of myself. Let’s start with the plane ride. We rode with Kenya Airways on the 14.5 hour plane 🛩 ride from JFK to Nairobi. The first thing we noticed when we got on the flight was it was hot. Like the temperature 🌡… we were sweating. We were in Row 12. After talking with some of the other people in our tour group, we learned that the issue was probably because the flight attendants closed the curtain between Main Cabin and First Class, but either way, it was still uncomfortably hot in our seats. We made a mental note that for our return flight, no more sitting at the front of Main Cabin (we sat in Row 17 on the way back, and it was much better).

Despite the heat, we persevered, and 9 hours later, and a few naps, movies, and meals later, we were passing over the Sahara Desert. Then another few hours later, our plane was finally nearing Nairobi. If there’s anything to remind us that Africa is huge, it’s the amount of time it took us to cross the continent. 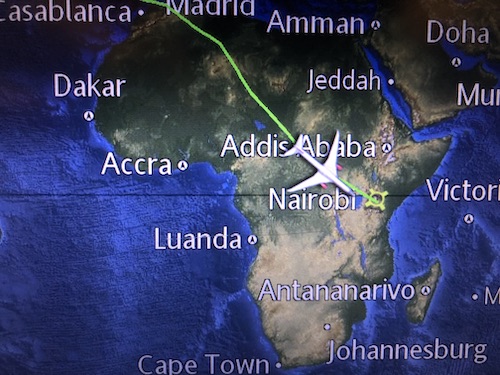 Map as we flew over Nairobi

After landing, getting through Customs, and picking up our bags, the first thing I noticed was the amount of guns the guards at the airport had. I’m not really a big gun person, so I’m not sure what types of guns they were, but I think maybe they were AK-47s or something… they looked to be military style 🙀. And they were all over. A few of us theorized that they were actually empty, and that people were only carrying them around for show… I didn’t feel like seeing if they were right or not. Either way, by the end of the trip, I eventually got used to the security guards always carrying weapons (huge rifles, large sticks, sharp knives, etc).

After a stop at Safaricom to get an international SIM card (~$10 for one month of data!) and a stop at an ATM to pick up some cash, we checked into our first hotel. We were surprised to find the hotel had metal detectors at the entrance. Shortly after, we were told by our tour guides that we were advised not to leave the hotel for safely reasons 😬. Welcome to Kenya, everybody!