Switching from kramdown to CommonMark

Up until a few weeks ago, my website (this website) had always used kramdown (the lowercase “k” is intentional) to turn Markdown into HTML. GitHub Pages (where my website is hosted) by default uses kramdown, so I kept it that way even as I moved my site to being built on a CI solution instead of building through GitHub Pages.

And over time, as I continued to add more content to this site, building the HTML website started to get slower and slower to load. When I started using Travis CI to build my application, running bundle exec jekyll build was maybe taking about 2 minutes of computation time. By the time it go over to CircleCI, it was taking a little bit longer. I don’t think the platform I was running it on mattered… rather my project continued to grow. And my first official build on GitHub Actions took 2.606 seconds.

When that happened, I hadn’t yet introduced my dedicated LEGO page. And when I did finally build my LEGO page, suddenly, the build time of my website skyrocketed. Using two different collections (blog posts and LEGO entries) and looping over both makes the build time of my site much higher than it was before. Add in a few more blog posts, and my site was taking between 4 and 5 seconds to load locally.

The amount of time my site takes to build on its CI tool doesn’t particularly matter to me… a few seconds don’t make a difference. What was almost painful was working locally. When I’m working locally on my computer, every time I make a small change to a file, Jekyll would reload my site. And waiting 5 seconds after adding one comma was pushing my patience.

So, when I came across the jekyll/jekyll-commonmark gem, I was curious. It advertises a Markdown parser that is faster than kramdown. The reason it’s faster is because it uses a C compiler instead of a Ruby compiler. Normally I’m kind of a Ruby-lover, but I will admit that it’s not the fastest language around. So, I thought I may as well try it out on a pull request. If it’s too many changes, or it doesn’t actually benefit me, then no need to switch; kramdown is getting most of what I want done.

Things started out easy. I added this to my Gemfile:

And I ran bundle install. Things installed nicely, and I was up and rolling.

Next I had to indicate to Jekyll to use CommonMark instead of kramdown. I deleted this:

I selected the options and extensions to use based on jekyll-commonmark’s documentation, and chose each one specifically based off of my needs as I debugged the switch.

The very first thing I noticed when I first ran jekyll build was that CommonMark was much faster. My build went from about 5 seconds locally to 2 seconds, all from switching to CommonMark. A blogger could get spoiled with build times that fast!

And then I took a look at the results. The first thing I noticed was that none of my Markdown showed up! My immediate thought was that CommonMark isn’t going to work if my content doesn’t show up. But lo-and-behold, the answer was simple… remove every use of markdownify in my entire site. To be completely honest, I’m not sure what markdownify is for, but somehow it previously indicated to kramdown to process a string as Markdown. I guess CommonMark didn’t like that.

Nice and easy. But apparently that’s kramdown specific, and the only way to define a Table of Contents in CommonMark is to do it the old-fashioned way (sort of similar to the GitHub Markdown way):

Now, if I’m completely honest, this isn’t that bad. It’s terrible to have to update, but if I wait until the blog post is written, then it won’t go through lots more changes. Especially when I found this Ruby file and fixed it up to suit my needs… it makes it easy to generate a Table of Contents based off of existing headers in a particular file.

The challenging part was setting the anchors. When I used kramdown’s TOC, the anchors were automatic (because I actually moved my navigation bar to be sticky, they actually had a slight bug in them the whole time, but that’s unrelated). Now, it was time for me to have to set my own anchors on my headers—adding to the amount of “annoying” that is having to update a TOC. This was the ending solution:

The first line indicates that this is an anchor, and the id="anchor" calls the CSS class that I added. Because my navigation bar is now sticky, I need my anchor to line up with the bottom of the top navigation bar, versus the top of the entire window. Without the second line, whenever a user clicked on a TOC link, it would slightly cut off the words of the anchor… not a very good user experience! So the second line actually makes an empty line &nbsp; the anchor. And the last line actually prints the words of the header, for users to see. With this, the actual anchor lines up with the top of the window, but to the user, it looks like it’s lining up with the bottom of the top nav bar. There were several links I used as research for this, and I’ll link to all of them below.

And then, the last trick was to add CSS:

Here’s what my anchor looked like in the beginning:

With the anchors misaligned

And here’s my anchors at the end:

With the anchors properly lined up

After I was satisfied with my changes, I willingly merged my pull request and deployed away. A little while later, I noticed a few other key pieces I missed.

First, my syntax highlighting also broke, and I didn’t even notice for several weeks! Here’s an image of how the HTML changed during the switch: 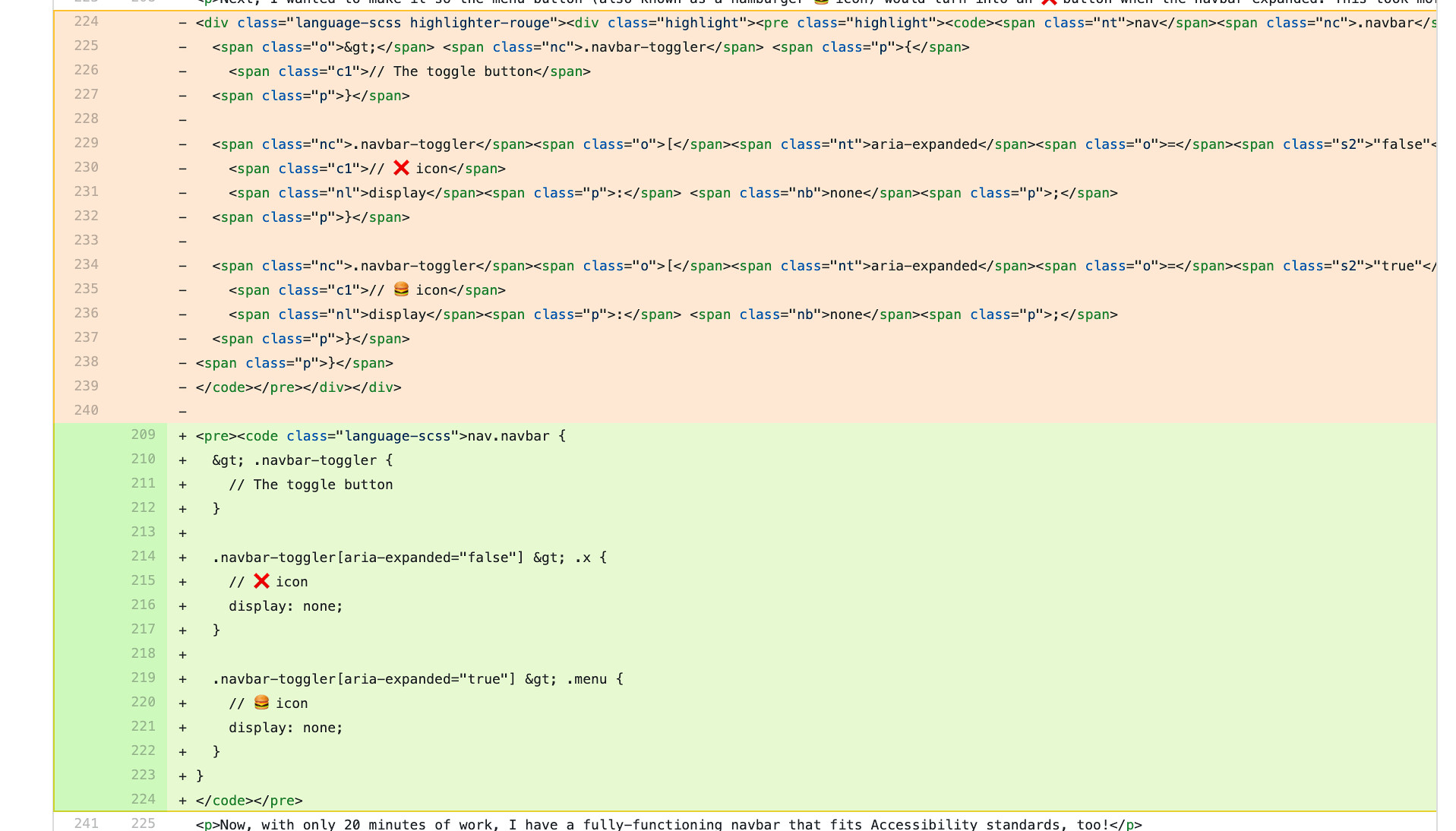 In fact, when I originally saw this, I probably thought the HTML looked cleaner after the switch. But in reality, the switch caused all of my syntax highlighting to break.

It turns out the solution was simple: pull jekyll-commonmark from the GitHub source directly… the pull request that introduces syntax highlighting was merged over a year ago, but was never officially released on Rubygems.

The very last thing I needed to add was that CommonMark needs directories specifically excluded in the _config.yml. I’m not entirely sure why this is, but without it, CommonMark adds a bunch of development directories to finished built site. This means that the public (ignoring my public GitHub repository) could, in theory, potentially access all of these directories and files, which is not good. Here’s the blurb I added to my _config.yml:

Most of these changes only took a few of hours, and in my opinion, they were well worth the time. In about 120 local builds, I’ll have made up the time that I would’ve spent waiting for my site to build. In writing this blog post alone, I’ve already done about 40 local builds. And the changes reflected on GitHub Actions? The last build with kramdown took 3.796 seconds to build. My first build with CommonMark took 1.794 seconds… just a smidgen over 2 seconds faster.

Update: Since publishing this blog post, I’ve actually added back in almost every usage of markdownify that I had previously removed. The only place where it absolutely does not work is when rendering individual blog posts. It’s possible markdownify wasn’t the source of what was broken, but was just masking other issues I resolved around the same time.