Since the beginning of the COVID pandemic, I haven’t done any traveling. I did go camping at a couple of state parks, visit friends’ houses, and attend a wedding a couple of hours away from the Twin Cities. But, I didn’t travel anywhere on a plane. So this past February, eager to get out of the house, I journeyed halfway across the Atlantic Ocean to the island of Iceland.

Getting to Iceland was an adventure in and of itself. We had to navigate Icelandic pre-registration, negative COVID tests, flight cancelations and delays, and incoming snow storms on the East Coast in order to make it onto the final plane to Iceland. I didn’t even have the worst of it… none of my flights were canceled. But the flights of several of my fellow travelers were, causing them to scramble to make alternative travel plans, including rebooked flights, connections through other countries, and trains. But after an exhausting day of travel (from the time I woke up in the morning to when I went to bed in the Iceland hotel, I had been awake for 36 hours), it all became worth it to experience this incredible country and have this amazing adventure.

I landed early in the morning at Keflavik Airport, which is about a 45 minute drive from Reykjavík. After picking up our luggage, our next mini-journey was to make it from the baggage claim doors to our bus transporation. The reason this was a small adventure on its own was because of the wind! I had been warned that the Icelandic wind was brutal, but I naively believed that I’d be totally used to the cold, since I’m from Minnesota. But, this wind was insane. Even this Minnesotan thought the wind made it freezing cold. The darkness (the sun rises late in the morning in February) plus the wind made Iceland seem very bleak. For a few moments, I wondered if I made the wrong decision to visit Iceland in the winter. I’m glad to admit my tune quickly changed once the sun rose and we got into the city.

After arriving at our hotel and dropping off our luggage, we turned to explore the city of Reykjavík. The greater Reykjavík area holds approximately 63% of Iceland’s population, but even so, the total population of the city is only about 230,000 people, just under the population of Birmingham, Alabama. According to our tour guide, although downtown Reykjavík has lots of buses and is quite walkable, as soon as you leave the immediate city, the suburbs start to look more like the United States. Much of the population is dependent on driving personal vehicles, and so every family owns a car… even in the city. Interestingly, while walking around, I didn’t see a lot of parking garages, either single-family house garages or apartment/public garages. So either there’s underground parking that I didn’t see entrances to, or everyone parks on the street.

While walking, we got to see some well-known places and statues, such as the famous Sun Voyager sculpture, shown below. It was built in 1986 as part of a competition to celebrate Reykjavík’s 200 year anniversary. It is not a Viking ship, as some may believe, but rather is designed to represent a dream boat and ode to the sun. 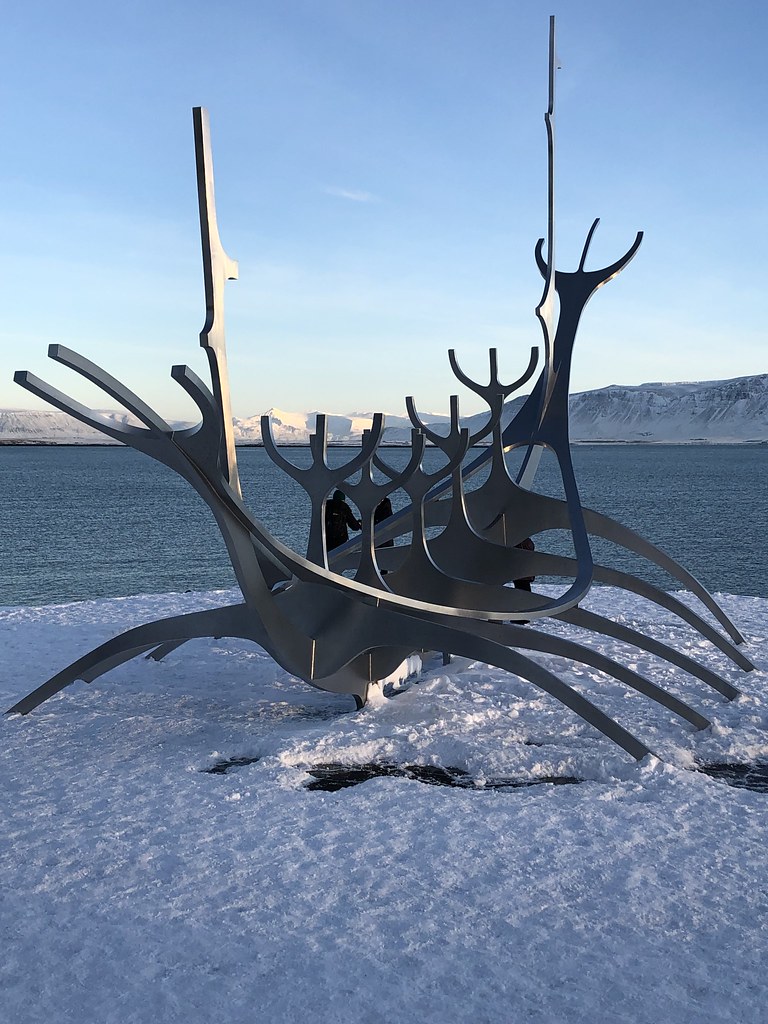 Within downtown Reykjavík, where we stayed, we didn’t see lots of big stores or malls. Almost all shopping and grocery stores were tiny markets surrounded by other shops and apartment buildings. In my opinion, the city felt a surprising amount like the U.S., with just a hint of Europe. All of this makes sense, since Reykjavík doesn’t have the same ancient history as other European cities. And since many of Iceland’s original buildings from before the 1700s were made of earth, they would’ve decomposed and fallen apart, especially when there was volcanic activity on the island. Therefore, most of the modern buildings in Reykjavík were constructed after the 1700s… much like the United States! 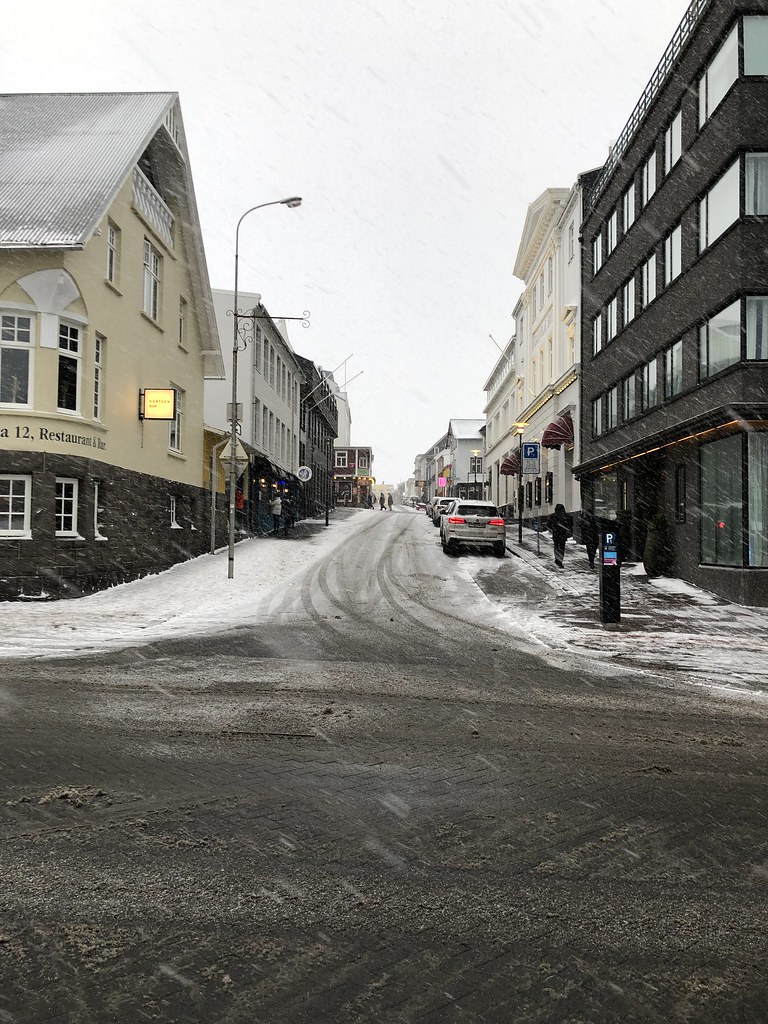 Looking down a Reykjavík street on a windy day

I attended three art galleries, including the National Gallery of Iceland, the House of Collections Museum, and the Ásgrímur Jónsson Collection. The particular day that I attended these, the weather couldn’t decide whether to be unbearable or lovely. At times, the weather was peaceful, and I could even take off my gloves while I walked. But when I’d exit the museum 40 minutes later, I’d have to bundle up because it was windy and blustery. But I didn’t let the indecisive weather stop my exploration; I walked over 8 miles throughout the city that day. 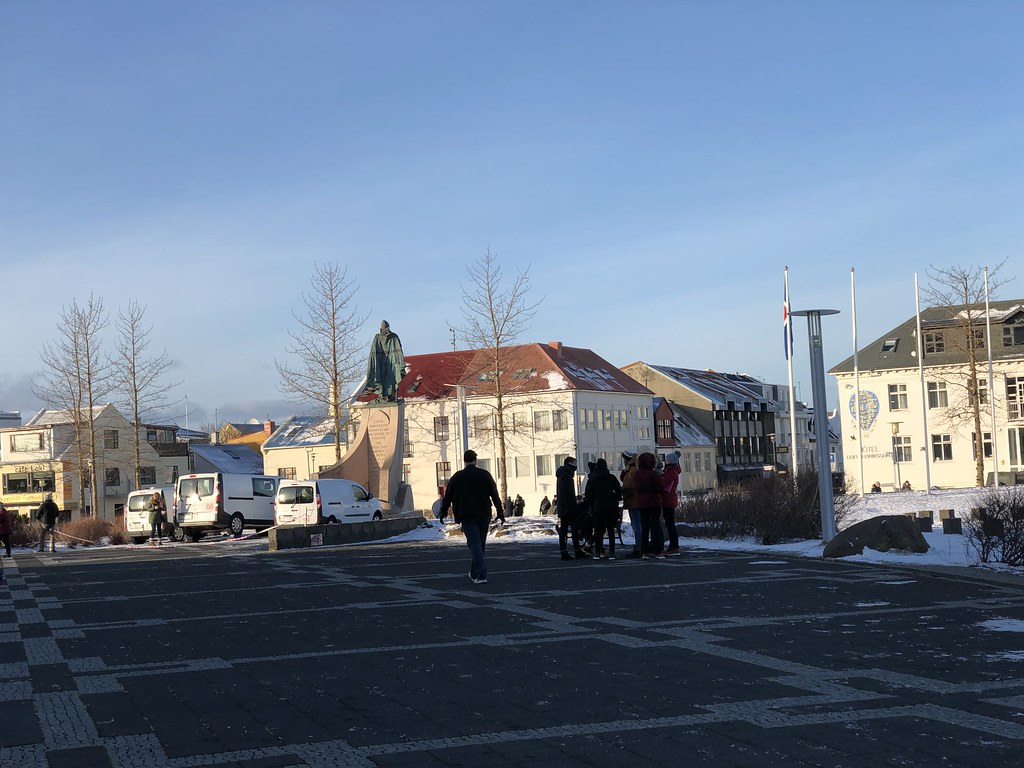 Statue of Leifur Eiriksson from the back 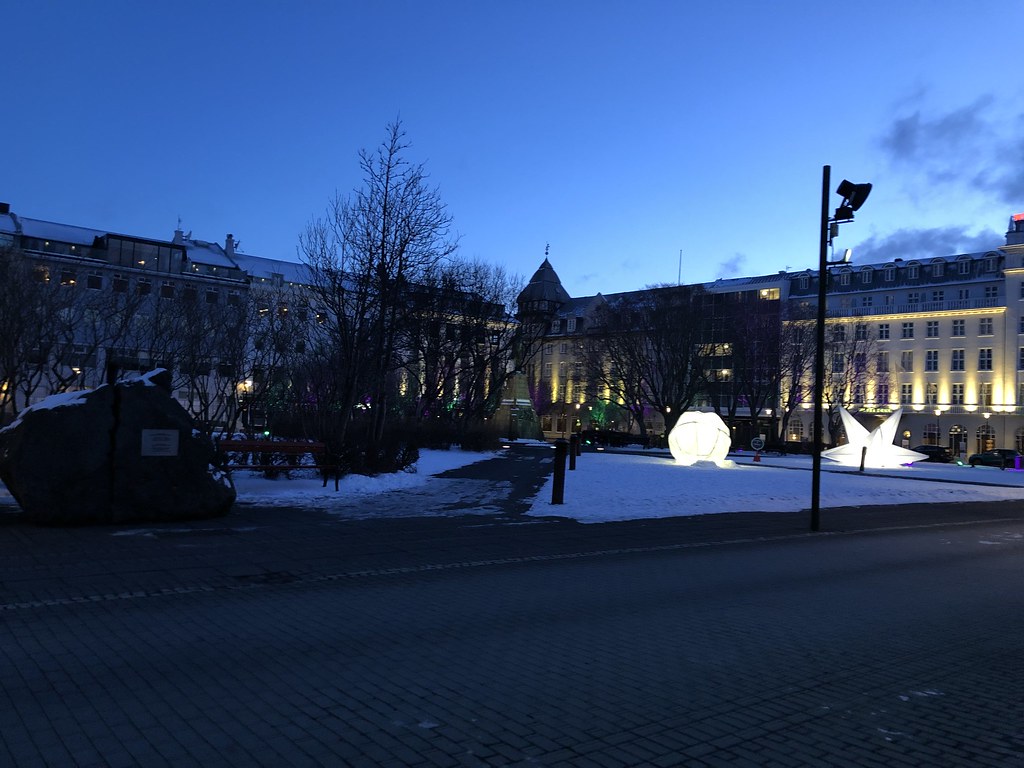 Austurvollur Square early in the morning

Throughout my time in Reykjavík, I also attended several museums, a local flea market, the Ice Bar & Gallery, and local shops. We took a trip to see the famous Hallgrímskirkja, and my friends and I even paid $8 each to take an elevator to the top of the church to get an amazing view of the city. Just make sure to plug your ears every 15 minutes when the bells ring… otherwise you might come out deaf. 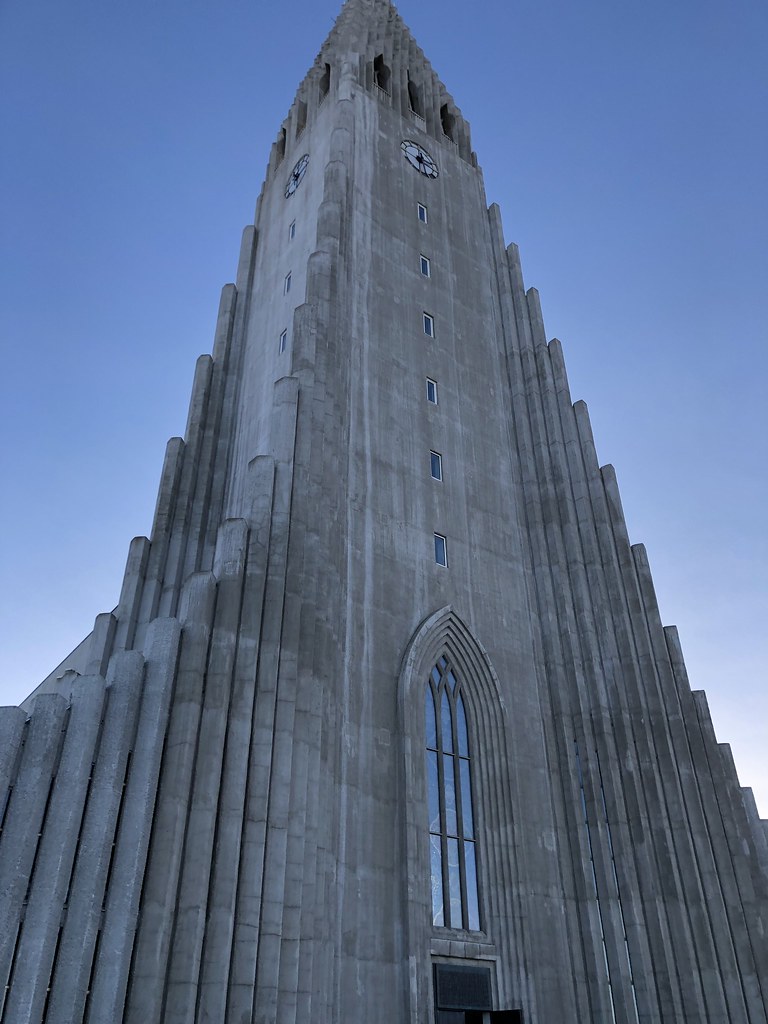 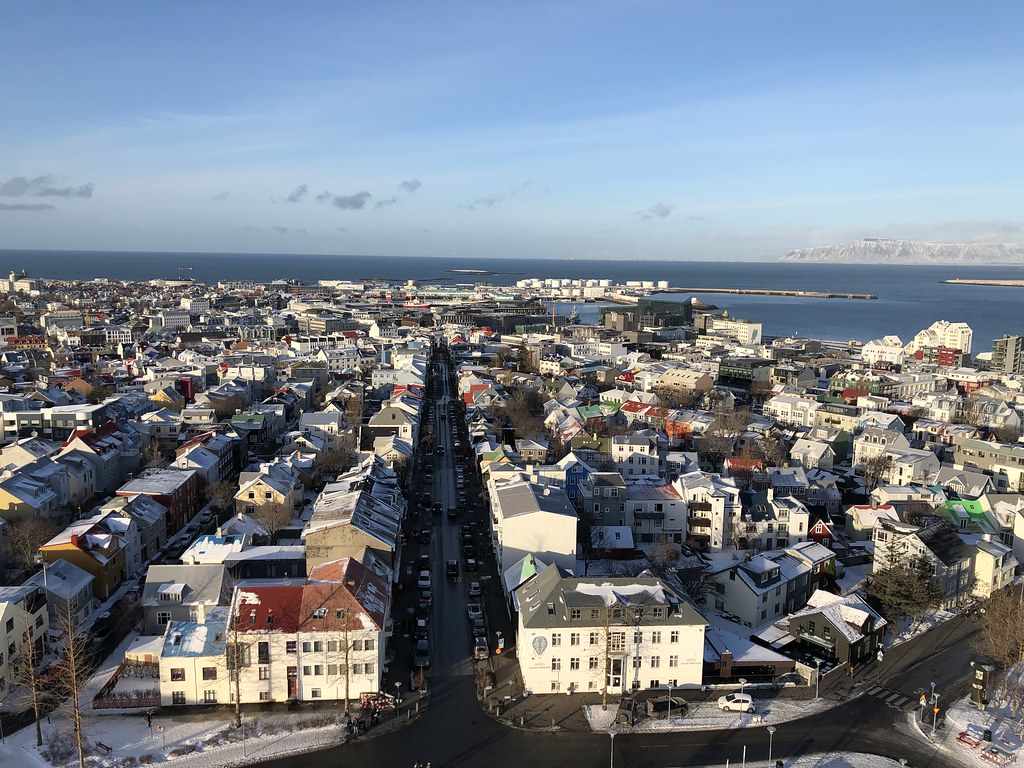 A view of the city from the top of the Hallgrímskirkja

The food in Reykjavík was incredible. Every single restaurant I went to served vegetarian options, and all of them were delicious. There was scrumptious pasta, flavorful falafel dishes, and surprisingly appetizing vegetables. I heard less glowing reviews about the fermented shark and whale blubber. The only restaurant that I’ll call out by name was the Viking Village’s restaurant, also known as Fjörukráin. Make sure to make a stop there for incredible props, art, and entertainment. You’ll need to take a taxi to get there because it’s not walkable from downtown Reykjavík, but the food is great and I’m sure it’ll be worth the trouble. 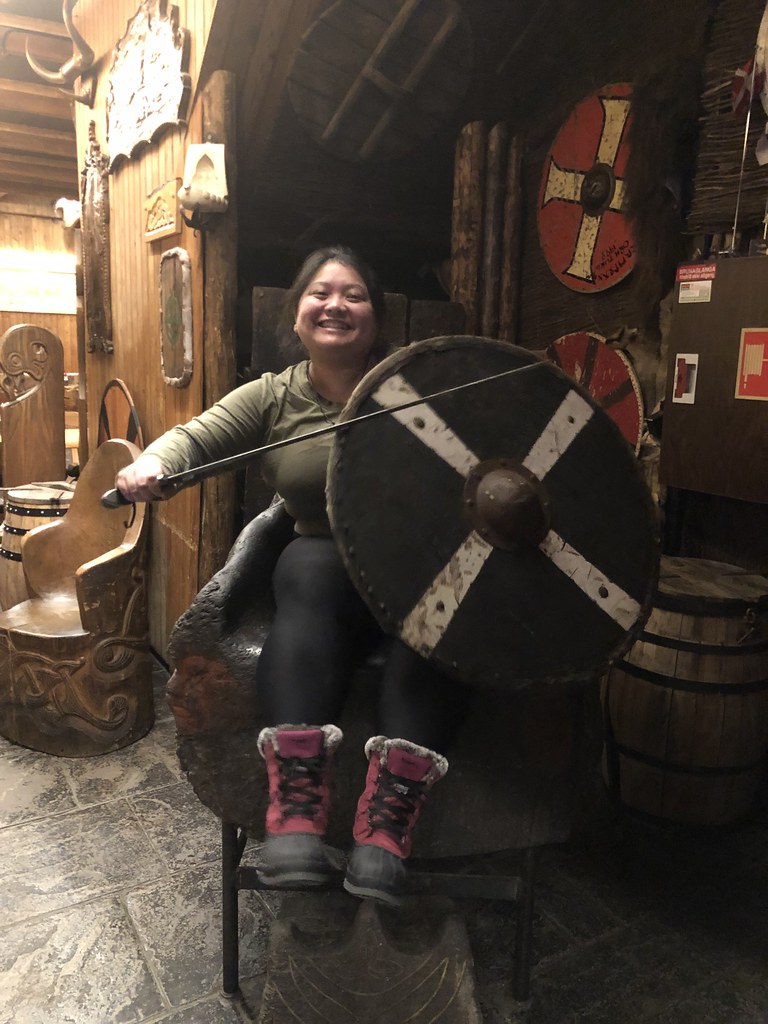 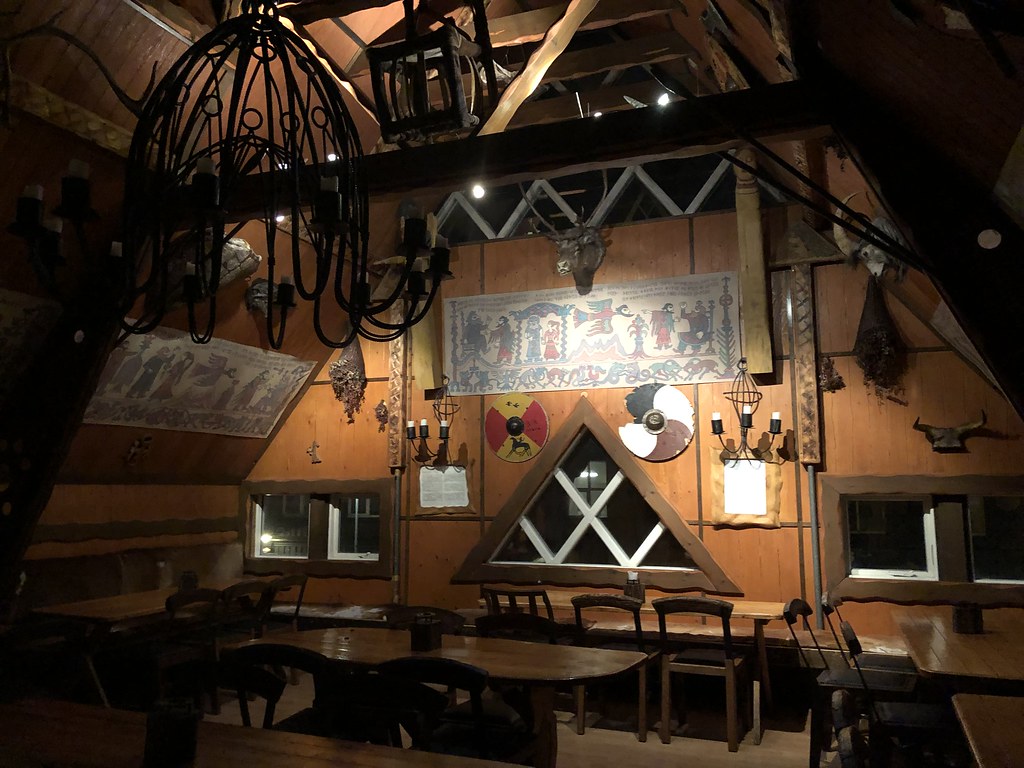 At the end of the day, even if I never left the city of Reykjavík, the trip to Iceland would’ve been worth it. I loved walking the city (possibly one of the safest cities in the world), and I loved learning about the city’s culture and community. There’s so many more museums for me to see, and so many more restaurants for me to eat at. I can’t wait to visit Reykjavík again in the summer time. But in the meantime, there’s lots more of Iceland coming soon to my Discovering Iceland blog post collection, and I can’t wait to share it all with you.