Here’s a peek at the “something” that I was able to see (they look amazing in the pictures, but weren’t as impressive in person… read more below for information on that): 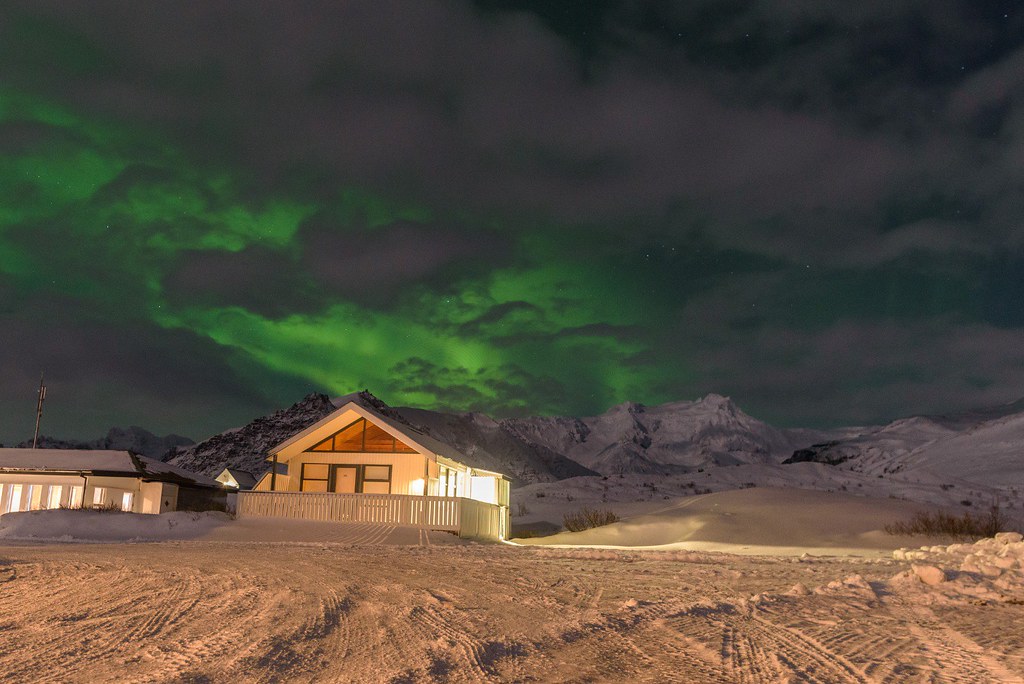 In the picture we can clearly see the clouds that block the lights, but distinguishing the two aren't as simple in person 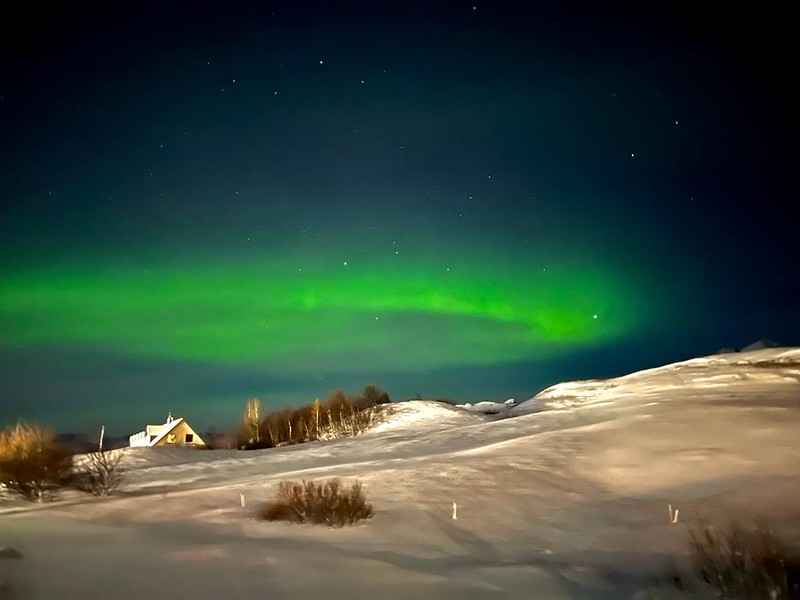 This photo truly captures how bright the northern lights can be... and how clearly we can see the stars! 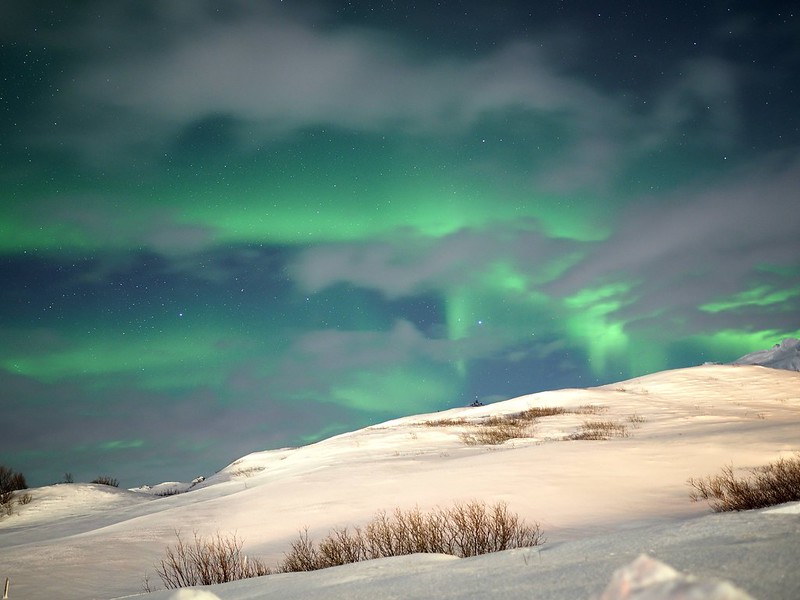 A light swish of green lights above the hill 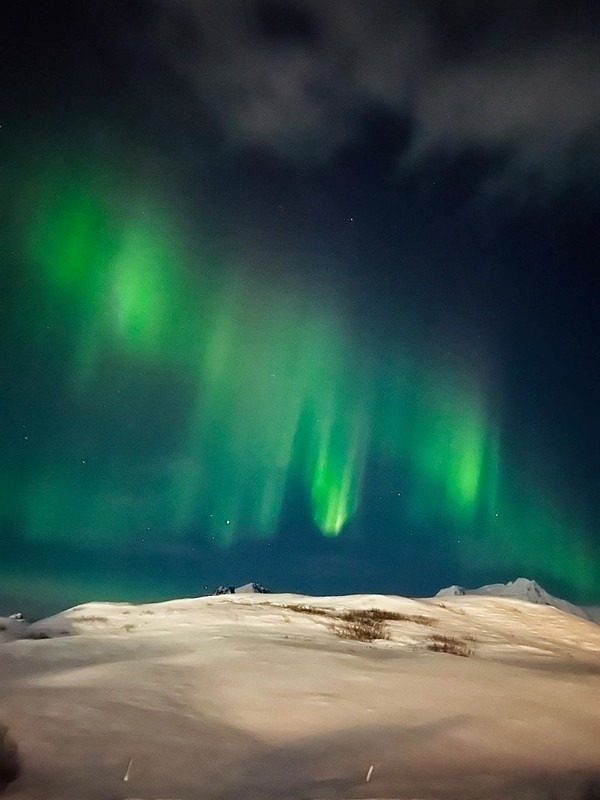 The Northern Lights are actually active all the time. Even when humans can’t see them, or when it’s the middle of the day, they’re still moving up there. But the lights are only visible in the aurora zone (approximately between 65° and 69° North), and it has to be dark to experience them. So, traveling to Iceland in the summer—which is typically peak travel season and when the weather is the most enjoyable—probably won’t give visitors ideal Northern Light viewing. During the summer, Iceland experiences a lot of daylight—around 16 hours worth. This means that there’s a very short window of time where there’s darkness to view the lights. And when we factor in that almost complete darkness is needed… well let’s just say darkness that dark is in even shorter supply. But in February, there’s only about 9 hours of daylight. And the sooner the sun sets and the later it rises, the more hours of darkness for people to potentially witness the Northern Lights.

So, let’s say that we came to Iceland at the right time, and are standing out there waiting for the lights. Unfortunately, even then, they’re not a surefire thing. There’s a lot of factors that determine how well humans will be able to see the lights. Cloud coverage, amount of solar activity, fog, light pollution from the cities and/or the moon, and current geomagnetic activity all have to line up in order to see those darn lights. And even when all the factors do line up, some peoples’ eyes have trouble seeing the colors in general. This is because human eyes have trouble seeing relatively “faint” colors at night. When it’s nighttime, our eyes adapt, and switch from using cone cells to see clearly and detect light to using rod cells instead. Therefore, some people, even with the strongest Northern Lights, would still see the lights in mostly greys. Our guide admitted that even after living in Iceland almost all his life, and as someone who’s seen lots of Northern Lights, even he has trouble distinguishing color differences. And who knows… maybe I’m one of those people, too.

From what I’ve heard, there’s sort of two types of Northern Lights shows/displays: weak (poor) and strong (good). During weak displays, when there’s not as many visible lights, it’s quite possible that humans will only be able to see streaks of grey slowly moving, like curtains slowly willowing in the wind. The fast-paced “dancing” I was expecting are all videos and timelapses that are sped up… typically the lights don’t move quite that fast. And although there may be grey lines and sweeps across the sky, they may be sort of fuzzy. The best bet would be to take a picture with a long-exposure night camera. It was kind of sad… when my fellow travelers were trying to take pictures, they couldn’t necessarily see the colors in the screen, and they can’t see colors with their eyes. So they blindly held their phone or camera pointing to the sky and just crossed their fingers that they were aiming at the right thing. Then, after waiting 10 seconds, they could finally see the result. But, if they were aiming at the right area, then they’d be able to see those lovely colors. Here are some examples of what the Northern Lights may look like with naked eyes (top) versus with a good camera (bottom): 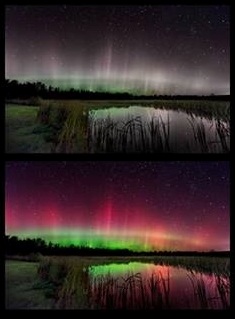 Notice how human eyes can really only see a hint of green at the bottom of the sky – from https://www.tripadvisor.com/ShowTopic-g189952-i223-k5964916-Do_the_Northern_lights_only_show_their_colours_in_photos-Iceland.html 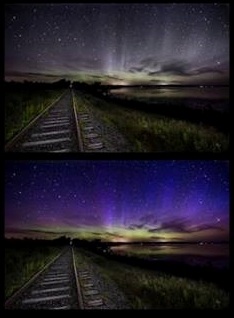 Here, the yellow, blue, and purple all blend in together to make grey streaks and lines – from https://www.tripadvisor.com/ShowTopic-g189952-i223-k5964916-Do_the_Northern_lights_only_show_their_colours_in_photos-Iceland.html

Unfortunately, my iPhone X wasn’t able to capture that, so all of our photos from this trip were taken by other people on my trip. They were taken mostly with iPhone 12s or 13s, or fancy photography cameras. Here’s a few more pictures that were taken by my friends on the trip: 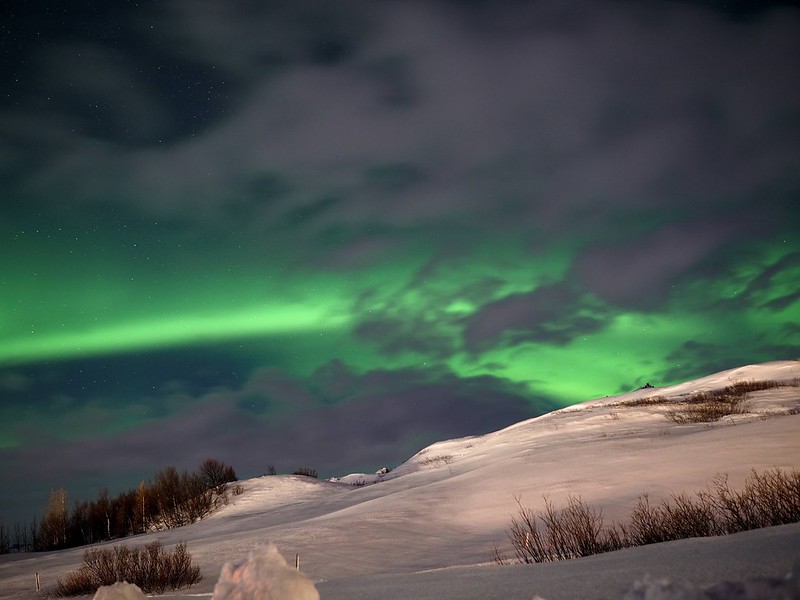 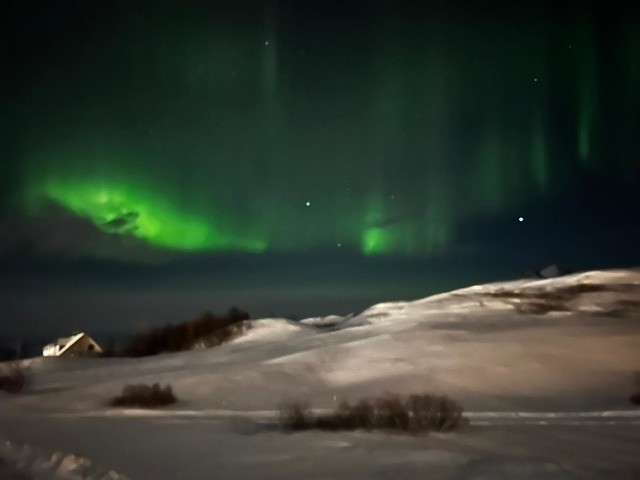 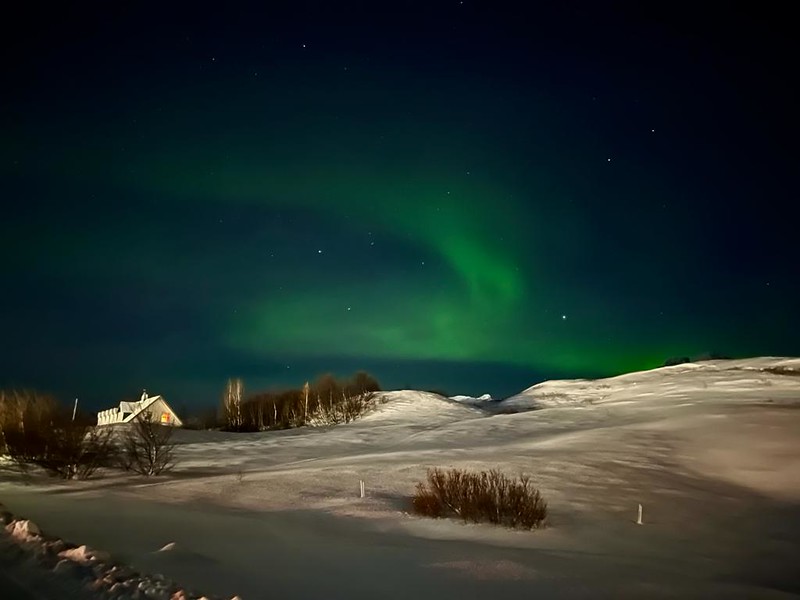 Finally... lights not being covered by clouds! 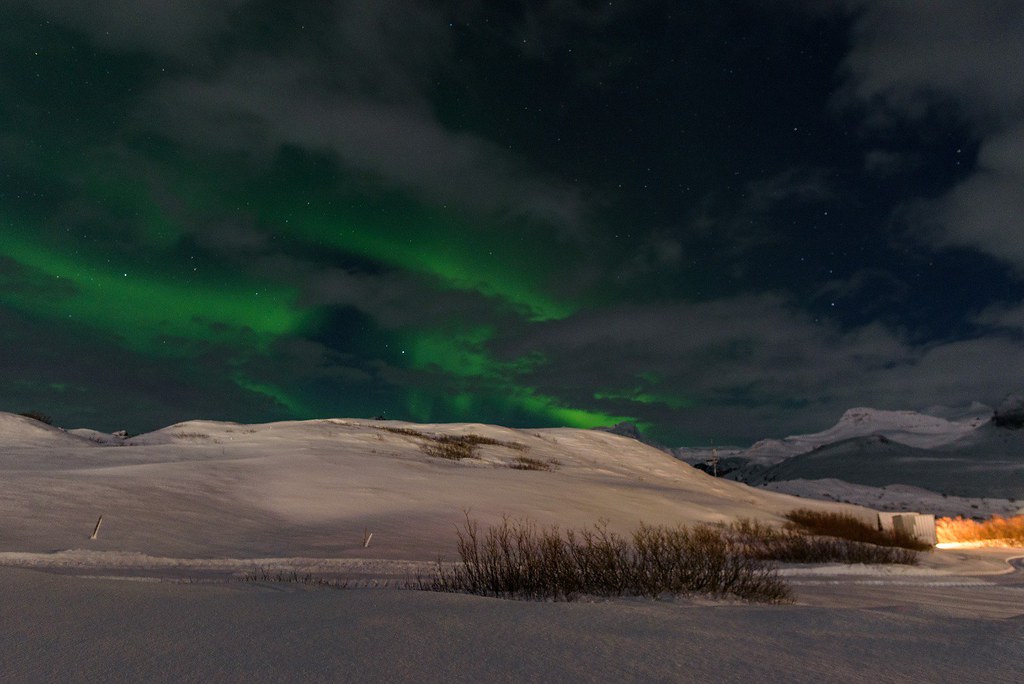 Even more lights, but this time not as bright... as if they're farther away from us

But what about all the amazing videos and pictures on the internet? Well, during strong light shows, then, the lights may be bright enough to help human eyes see more vivid colors. They typically show up green first, but then the lights may turn magenta, purple, and blue. And at that point, plain naked eyes should be able to see everything, unless the viewers’ eyes are the sad eyes that have trouble distinguishing night colors altogether. AND, using a long-exposure night camera will exaggerate the colors even more, just creating those beautiful photos and videos we all watch on YouTube. I’m sure you’ve seen them before, but check out just a couple photos of what strong light shows may look like (with a camera of course): 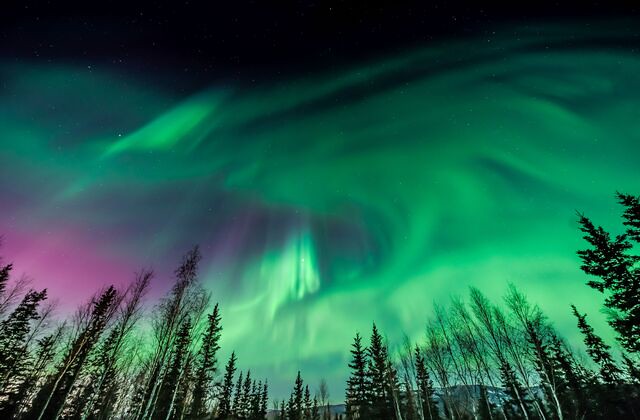 Beautiful swirls of green above the forest – from https://travel.usnews.com/gallery/the-best-places-to-see-the-northern-lights 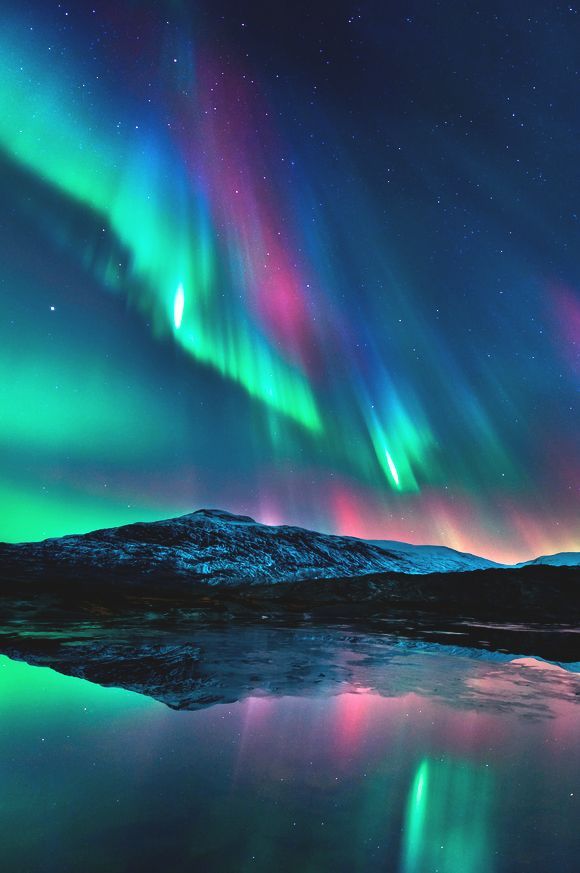 So at the end of the day, the lights I saw were weak lights. We saw them with our naked eyes, and we saw them slowly move, but we didn’t see any colors besides grey with a slight tint of green, and we never saw them “dance” the way I wanted to. I guess I’ll just have to go back to Iceland again soon to give myself another shot at those magical lights (and next time with a better camera).

But, to close this out, here’s a beautiful video of what I like to pretend I saw:

Additional photos were obtained from the following resources: