When I visited Iceland, I tried to not have lots of expectations. The lower my expectations, the better the likelihood that my experience would exceed those expectations. But, there was one thing that I certainly did expect: ice! And Iceland did not disappoint. We saw so much ice and snow. We actually had a huge snowstorm a couple of days after arrival. And although the snowstorm didn’t slow us down, it allowed us to fully experience Iceland in all its icy glory.

I’m going to intentionally keep the words in this blog post to a minimum, and just show a lot of pictures… you’re welcome.

This first picture shows a windy and snowy walk within Þingvellir National Park (known to non-Icelanders as Thingvellir… the Þ is a unique Icelandic letter). From here, you can observe the drift of the European and American continental plates. Also, at one point, Iceland held its first Parliament here. The views were stunnning and beautiful. However, if I’m completely honest, I’ll admit I wasn’t able to fully enjoy the walk because my legs were numb… I should’ve worn another layer of pants. But, because I know I’d regret it, I stopped to take a photo or two! 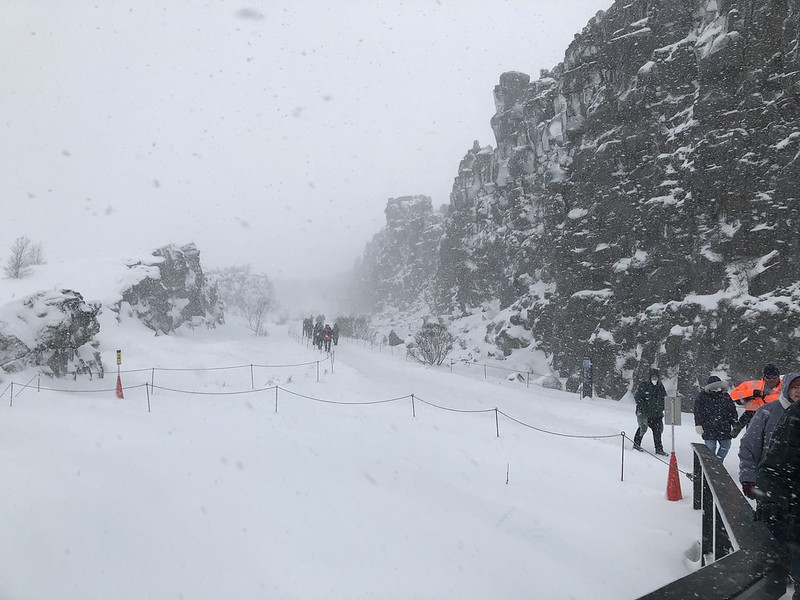 A beautiful—but cold—walk in Þingvellir National Park... the path was well-trodden so the slip risk was minimal

We got the chance to see three waterfalls on the trip. The first one was Gullfoss Falls. It’s a part of the Golden Circle on the south of Iceland. Even in the winter, it doesn’t completely freeze. Unfortunately, we visited this waterfall on a cloudy day, otherwise we might’ve been able to see some rainbows! On a sunny day, the water may turn a golden-brown color—in fact, “Gullfoss” means “Golden Waterfall” in Icelandic! 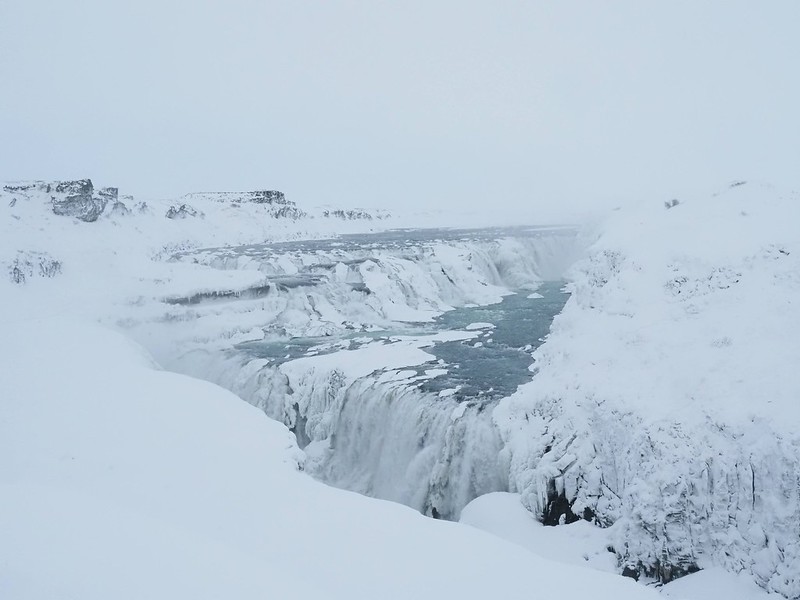 Gullfoss Falls has a deep crevasse that water flows into... the crevasse deepens by an extra 9 inches each year from water erosion 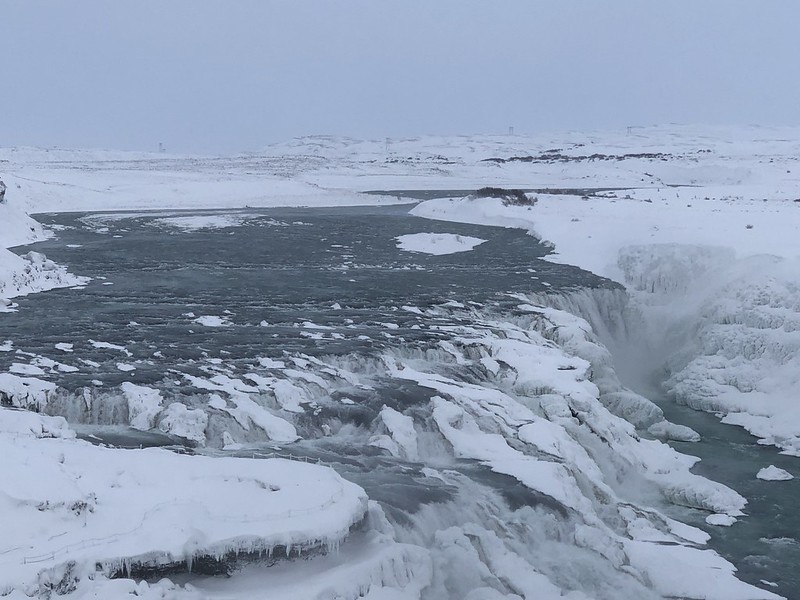 The first smaller waterfall within Gullfoss Falls—notice how the waterfall has partially frozen over, but is still running

The next waterfall we saw is Skógafoss. This waterfall is located on the Skógá river, and is 82 feet wide with a 197 feet drop. It’s one of the biggest waterfalls in Iceland. During the summer, you can walk right up to the wall of water, but in the winter there’s ropes preventing you from getting too close. As a result, there was little risk of getting wet. There’s also a staircase so you can walk to the top of the waterfall… I didn’t do that part. In the winter, the waterfall runs slower than in the summer, meaning we could actually see gaps within the falling water. 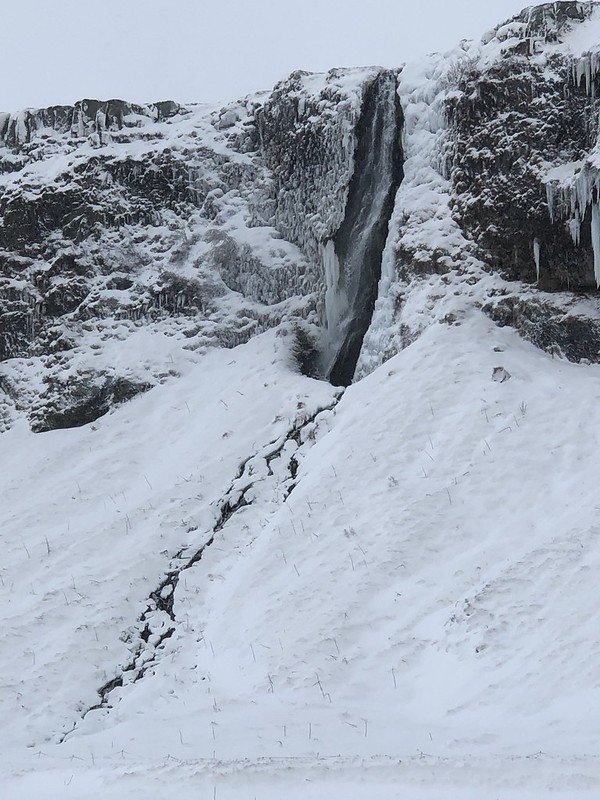 This is a smaller waterfall to the side of Skógafoss—water runs into a hole between the ice, and then pushes out over the top of the ice into a small river 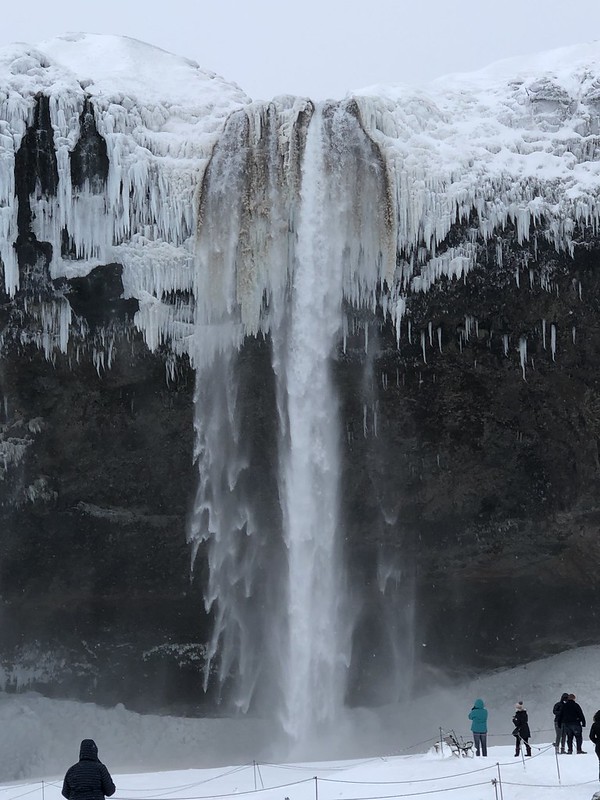 Skógafoss in the wintertime, but unfortunately, no rainbows (which Skógafoss is famous for on sunny days) came out to greet us today

The last waterfall we visited was Barnafoss. This means “Children’s Falls” because of an old legend, which goes something like this.

A mother told her two children to stay home while she went on to church. She took a safe route to church, but when her children tried to follow, they used a shortcut which involved crossing a stone bridge over a rapid waterfall. While crossing, they lost their balance, and fell to their deaths. Afterwards, the mother demanded the bridge be torn down.

There are a couple of versions of this legend, and it’s possible the legends are actually true… Barnafoss is one of the fastest and most dangerous waterfalls in Iceland.

Barnafoss’ neighbor, Hraunfossar (meaning “Lava Falls”), is unique, as Hraunfossar is a series of trickling waterfalls that flow from a plateau of lava rock. You got that right… there is no single water source at the top of the falls! Because of this, less of the water freezes over, and you can see the river running even in the winter. 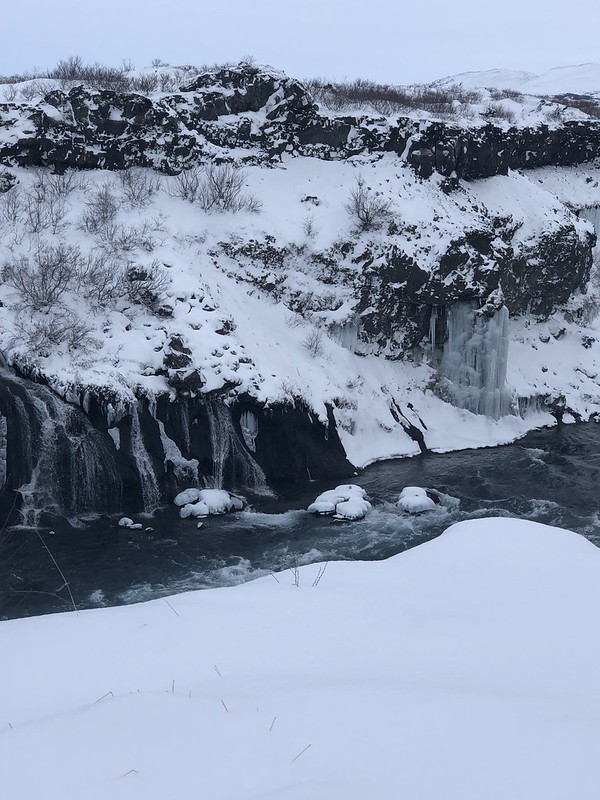 Hraunfossar with water coming straight out of lava rock 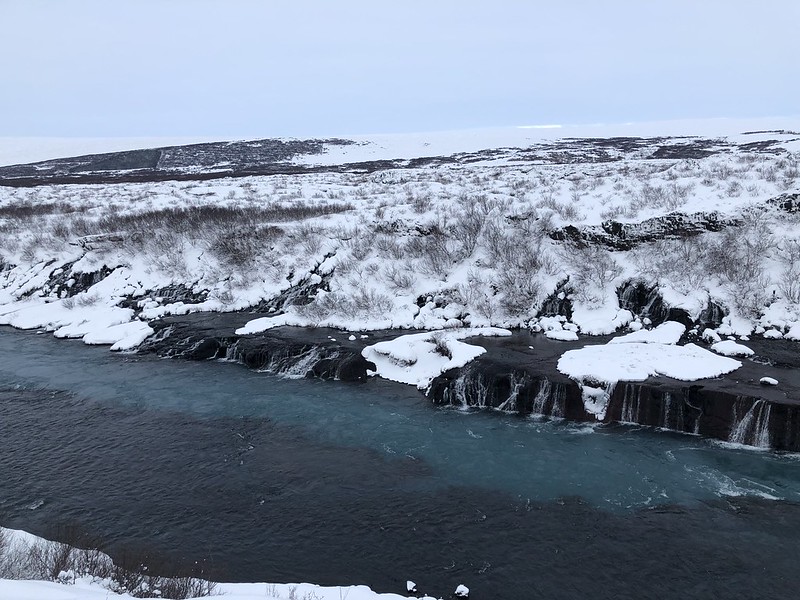 The small, trickling falls of Hraunfossar flowing into a wide river

Hraunfossar in a stunning panorama 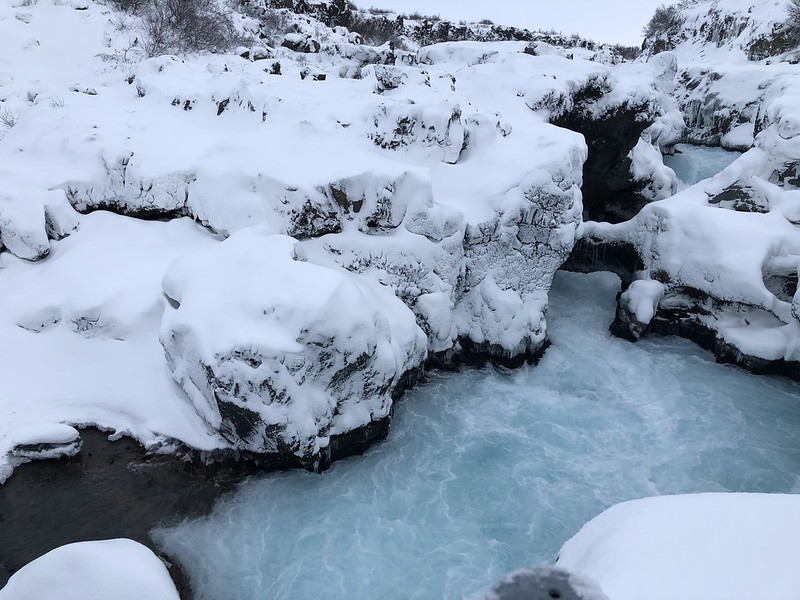 Barnafoss in the wintertime 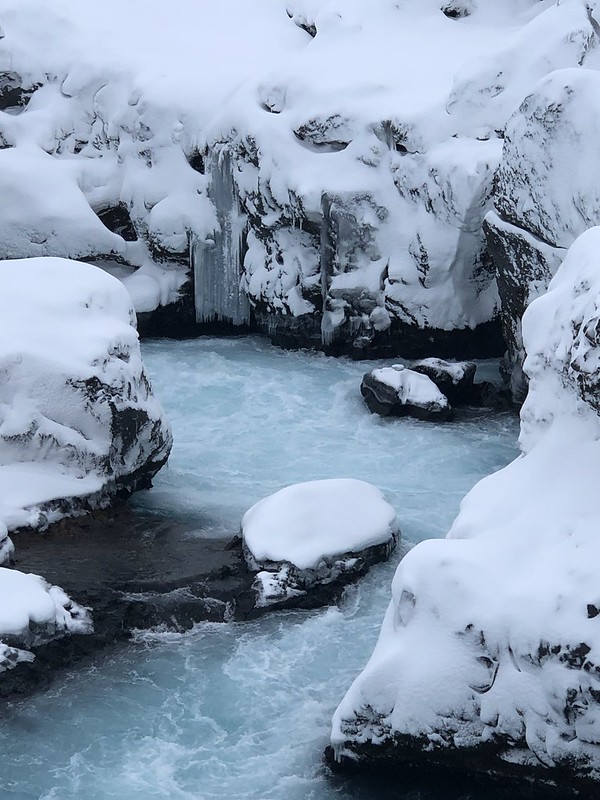 The water of Barnafoss doesn't run as quickly in the winter, but it's still a dangerous place to swim

The last couple of places I’ll show is a glacier—which is what you came to this blog post to see, right?! We walked on Europe’s largest glacier: Vatnajökull. This glacier covers 8% of Iceland’s landmass, but in a couple of years, I’ll have to revist that stat because the glacier is rapidly receding due to climate change. In fact, our guide told us one of the bridges we walked on was built in 2018 because five years ago they didn’t even need the bridge!

The Vatnajökull glacier conceals the tallest peak in Iceland (Hvannadalshnujúkur at 7,218 feet), as well as some some of the most active volcanoes in the country. Vatnajökull contains over thirty outlet glaciers (channels of ice that flow out of ice caps), and numerous rivers run out of the glacier, creating some of the largest glacial rivers in Iceland.

Unfortunately, as you’ll see in the pictures below, the glacier isn’t that impressive when it’s all covered with ice and snow. I hope to go back to this glacier or a similar one in the summertime. 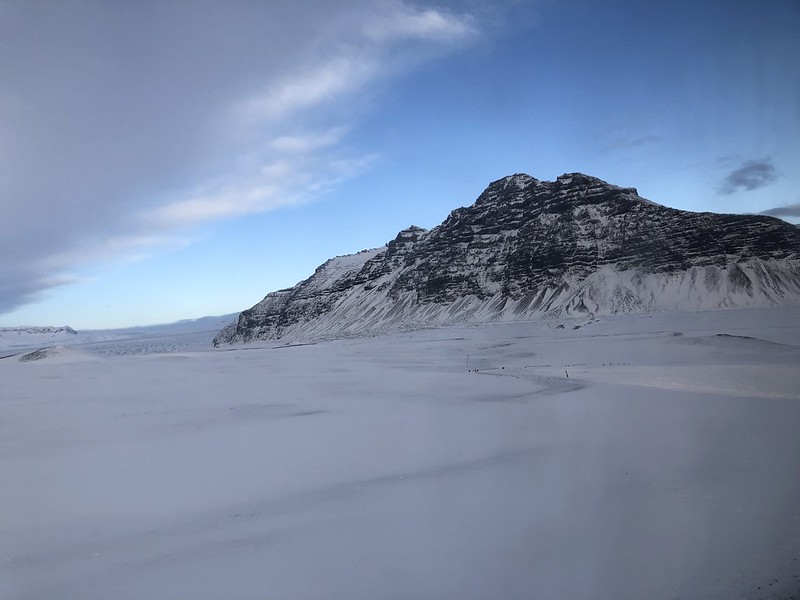 The top of the Vatnajökull glacier just a few days after a big snowstorm... it looks just like a snowy plain 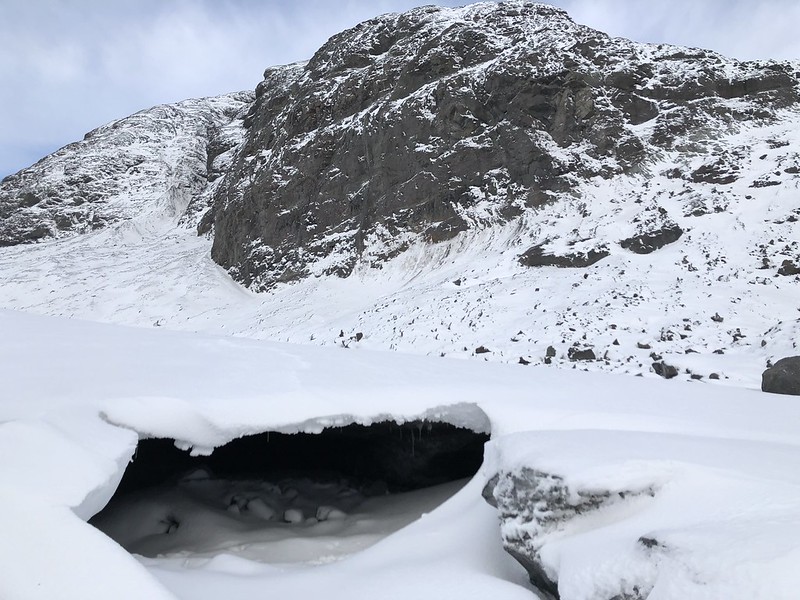 The opening of an ice cave in the Vatnajökull glacier

But, despite an underwhelming view of the top of the glacier, we did get to see one of the most beautiful (in my opinion) sights in Iceland: an ice cave. Technically, they are glacier caves, but the name “ice cave” has become more popular over time. Ice caves are formed when meltwater runs under or through a glacier, which melts the ice and leaves behind a cavern within the glacier. During the summer, the warmer temperatures and the sun melt ice at the surface, creating an open hole that allows humans to walk through in the winter. Meltwater then drains downwards vertically through crevasses in the ice, which allows the water to descend to the bottom of the glacier. This means that where humans walk in the winter is exactly where water flowed in the summer. And every year (and even during the winter months), ice caves change, growing and shrinking, hardening and softening. Sometimes, caves that existed one winter are completely gone the next, and then tour guides have to hike around the glacier in September/October just hoping there’s another cave nearby that can be used to give tours.

The particular cave we saw, the Sapphire ice cave, has existed for a few years. I believe our guide said this winter was their third winter with that cave. The images below don’t fully capture its beauty, but inside it, you can see rays of light blue light beneath the ice. Even when we hike down into the cave and turn all our lights off, we can still see the blue poking through the darkness. This blue light is a result of sunlight coming through the top of the ice and being filtered down to just blue light waves. At the openings of the caves, where the sun hits the ice directly, the ice becomes uneven from constant melting and refreezing throughout the winter. But deeper inside the caves, the ice forms smooth patterns that almost look like frozen waves. But if you touch the walls (which is totally allowed!), you’ll notice they’re actually dirty and grimy from specks of dirt, rocks, and pebbles that get frozen in place. These caves are a truly magical sight. 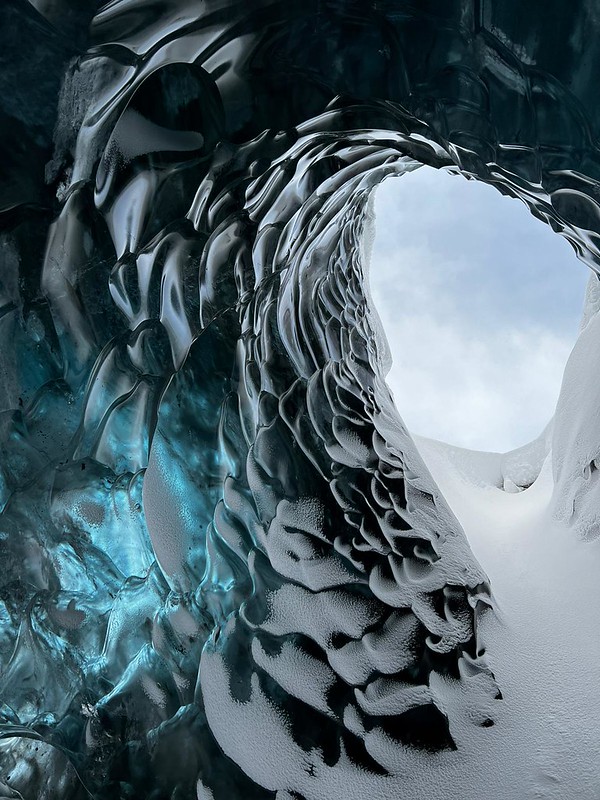 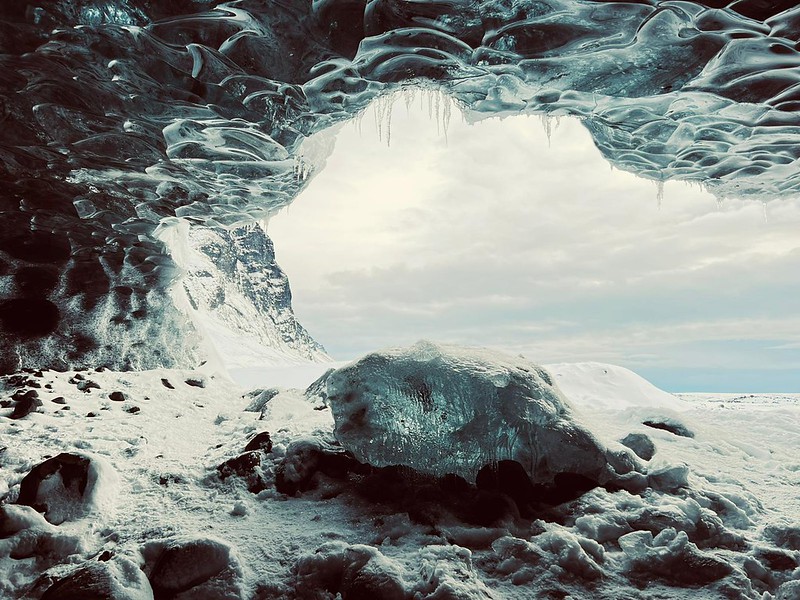 An entrance of the ice cave 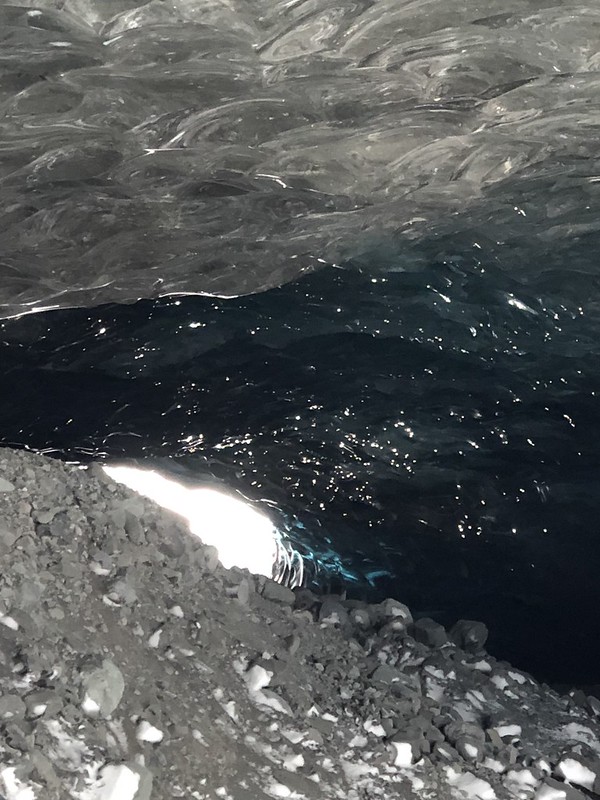 In the summer, water flows over these rocks and through the entrances of the cave before freezing into beautiful icy tunnels 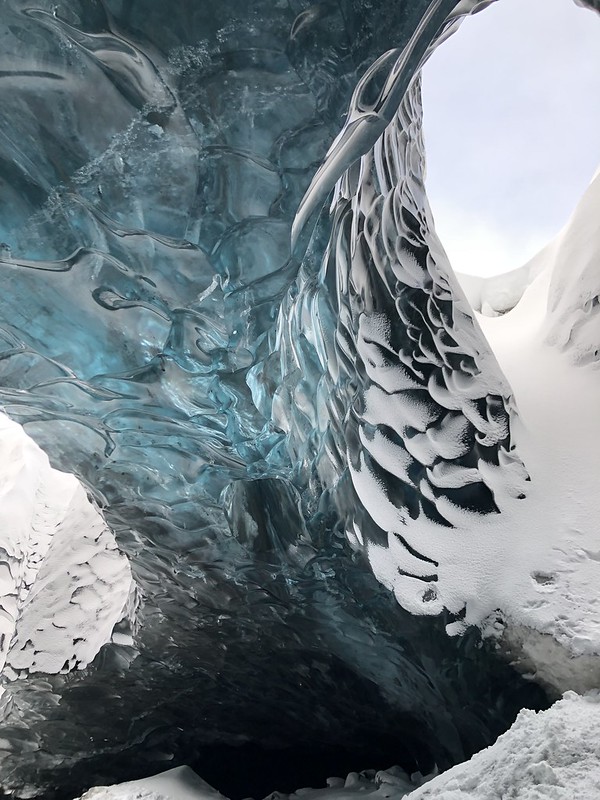 Lastly, I have to give a shout out to my friend and fellow traveler, Mark Huy, for this incredible photo: 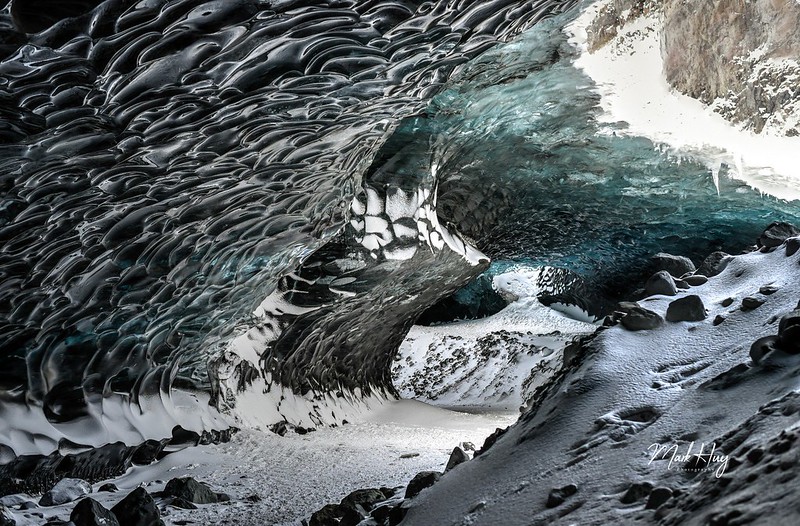 The inside of the Sapphire ice cave, covered with snow that blows in from the sporadic holes in the cave – photo by Mark Huy

As you can see, Iceland does indeed have a lot of ice and snow. But, all of these photos were from the wintertime. If tourists visit Iceland in the summer, they’re bound to see something different… which is one huge reason Iceland is an incredible place to visit all year round.

Well, that’ll be all for this blog post! Please feel free to check back in another week or so for the next installment of the Discovering Iceland blog post collection. And if you don’t want to keep having to check back over and over again, feel free to subscribe to my RSS feed on my main blog page.