Before traveling to Iceland, I didn’t realize that Iceland is a completely volcanic island. It’s estimated that this island didn’t even exist above sea level until approxmiately 18 million years ago. And even today, Iceland has around 130 volcanic mountains, some of which are dormant, and some that are active. Since Iceland was settled around 875 CE, 18 volcanoes have erupted. And because of these eruptions, there’s lots of lava.

So, and just go with my random switch in directions here, that brings us to the point of this blog post: why are Iceland’s beaches black? To clarify, not all of Iceland’s beaches are black. Some are… well… normal colored. But there are others where the entire sandy beach is completely black. Why is that? Well, when volcanoes would erupt, some of the eruptions would be so massive that the burning hot lava would flow all the way to the ocean. And when the hot temperature of the lava reached the cool temperature of the ocean, the lava would instantly cool down, and turn black and hard. Eventually, the lava rock would erode so much that it would form tiny little pieces as small as sand. This “sand” doesn’t feel the same as other sand around the U.S. This “sand” doesn’t stick to your shoes, and you don’t track it all the way back home. If you were to swim in Iceland’s oceans (which people do, but I didn’t), I doubt it’d get stuck in your swimsuit. Also, the “sand” is very soft to walk on.

But, this sand is precisely what many of Iceland’s beaches are known for. The most famous black sand beach in Iceland is Reynisfjara. Because black sand beaches are common, what makes Reynisfjara stand out? The answer is: massive stacks of basalt, bassalt grottoes, cliffs, and stone arches. I don’t completely understand the science of how the basalt dries in columnar form, but it has something to do with how the basalt lava cools and contracts once exposed to the air. I could write an entire blog post solely on the geological magic that is Reynisfjara (and all of Iceland for that matter), but because I’m not an expert in that subject, I’m just going to add a few links where you can learn more:

But, if you ever visit Reynisfjara, make sure to take extra precaution of the water. This beach is notoriously known for its sneaker waves. These waves sneak up on unsuspecting humans, and then the waves pull them out to sea. Every few years, a poor tourist will lose their life because of these sneaker waves. Our tour guide recommended to watch for where the sand changes from footprint-filled to smooth, and consider that the line from which we do not cross. But, the danger of the water doesn’t stop tourists’ visits to the beach! Reynisfjara was rated one of the most beautiful beaches in the world! Interesting fact: some episodes of Game of Thrones were even filmed on this beach! 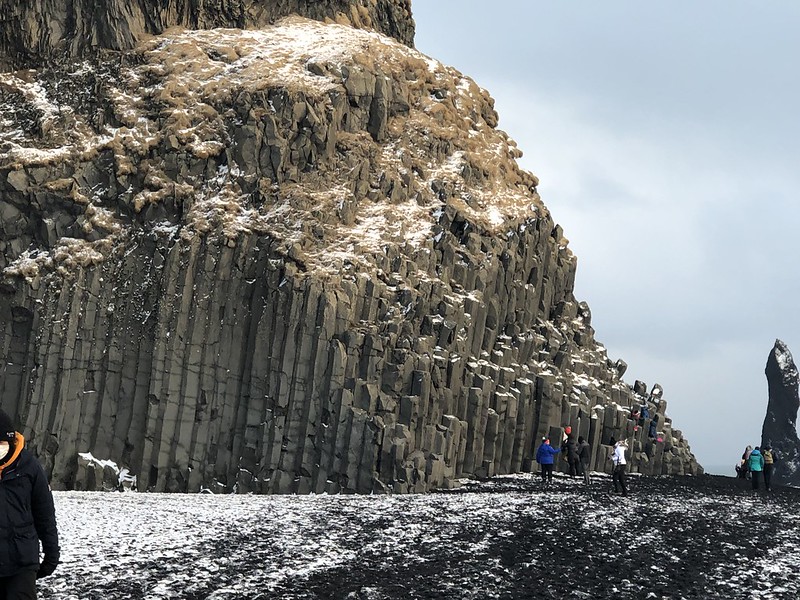 The basalt columns of Reynisfjara 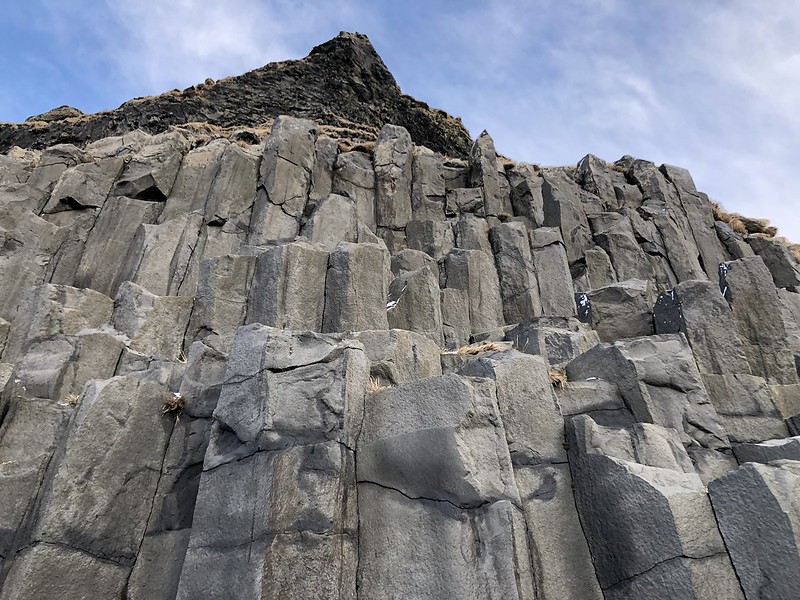 Reynisfjara's basalt columns are even more intimidating up close! 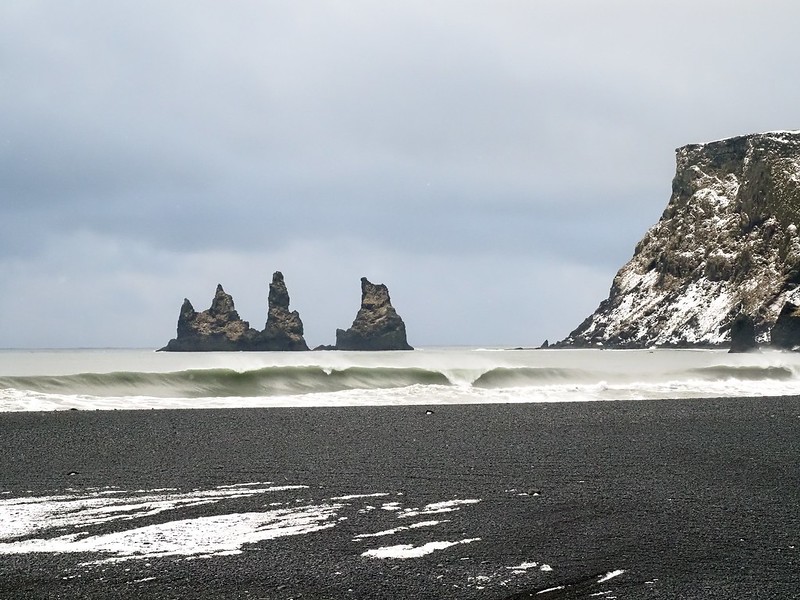 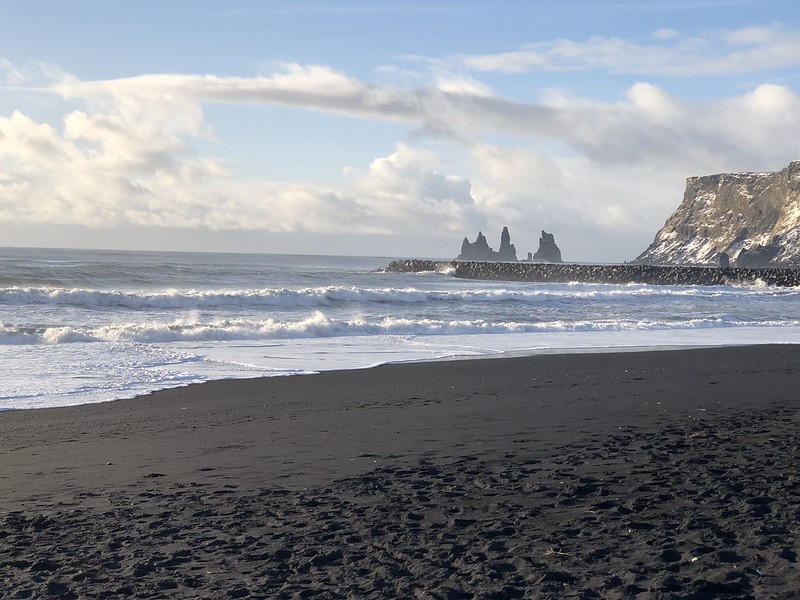 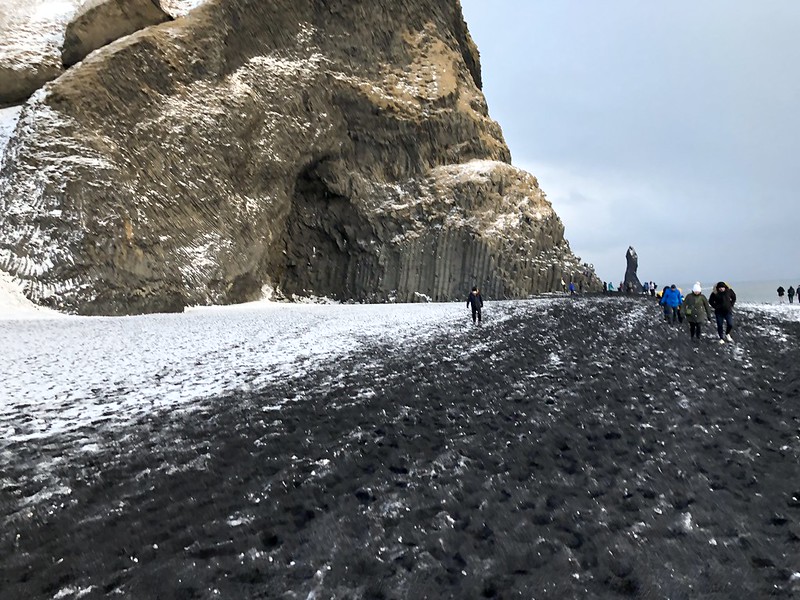 This beach is a popular tourist and photo attraction

The other beach we visited is known as the Diamond Beach. The Diamond Beach is similar to Reynisfjara in that the sand is completely black from the lava, but it’s also packed with chunks of ice, that—you’ve got it—shimmer like diamonds in the sunlight. There are some ice chunks that are large enough to sit on, but other pieces that are small enough they could actually be frozen diamonds! I really wished that I could’ve picked some out and taken them home with me as souvenirs… obviously they would’ve melted before I got home. 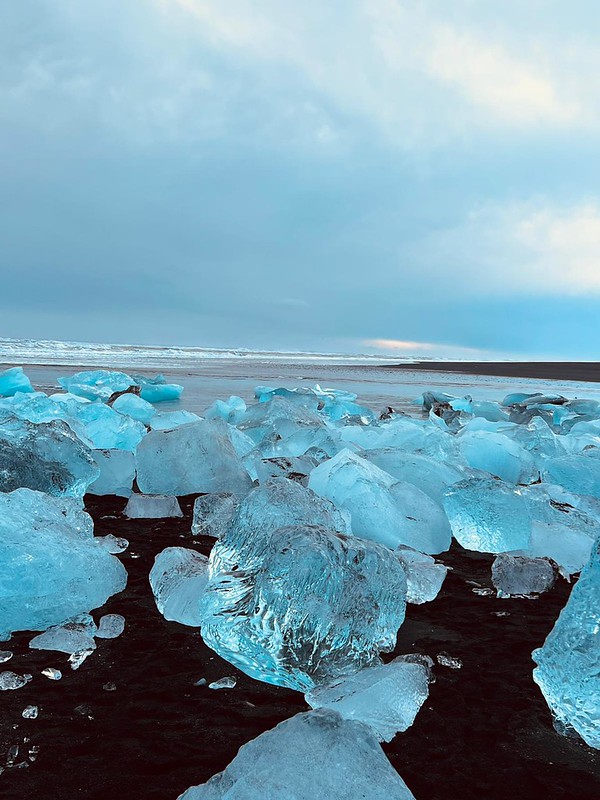 Blue icebergs glimmering in the sunlight 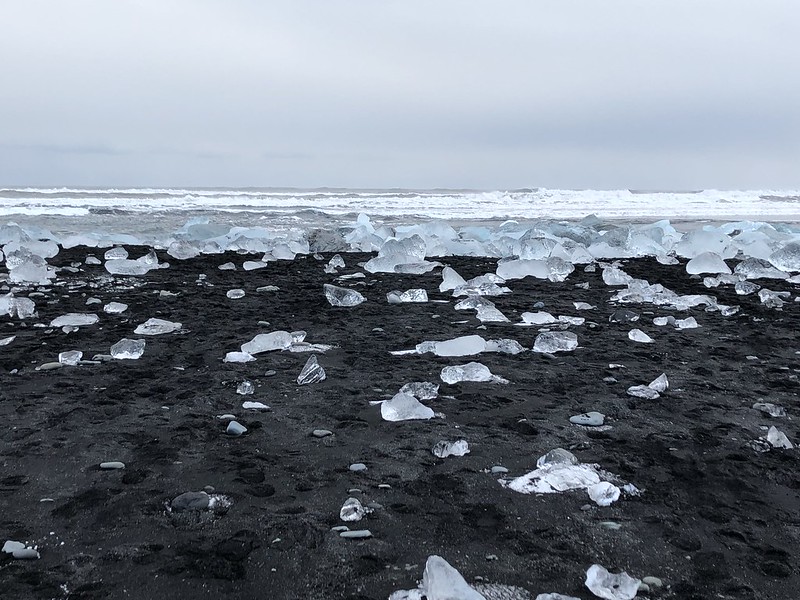 This is why Diamond Beach was named the way it was 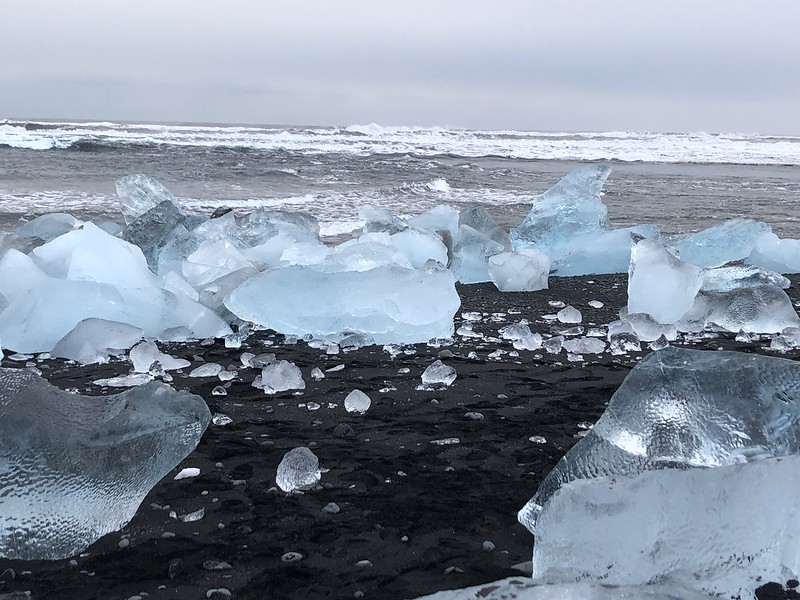 Some of the ice chunks are large, and some are tiny 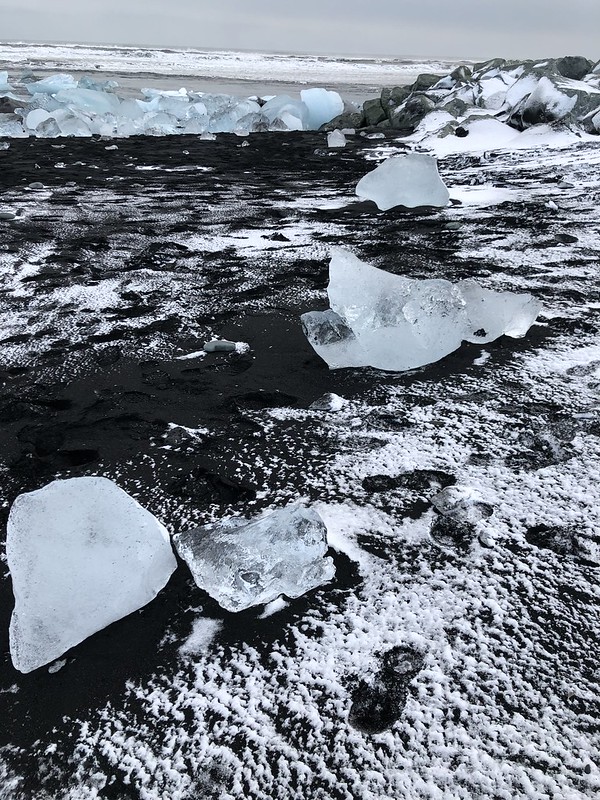 Even through the snow, it's clear the sand is very black... creating a stark contrast with the light blue and clear ice chunks 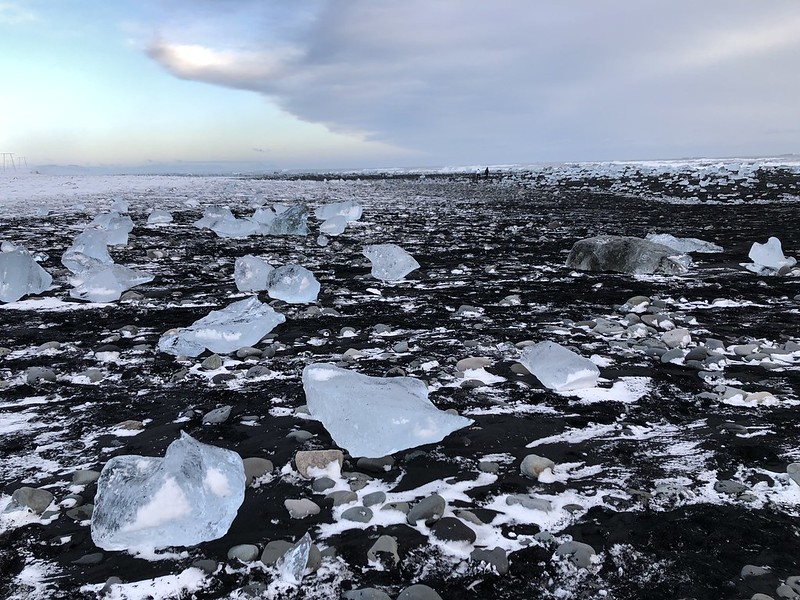 There were also lots of rocks on the beach... I think some of our group may have taken some home as collectibles

I also got the chance to walk along the river Jökulsá, which connects the Jökulsárlón glacier lagoon to the Atlantic Ocean. On this river floats hundreds icebergs that have broken off of the glacier, and the ice is whisked and pushed out to the ocean. Walking alongside the river was a beautiful sight. The weather was lovely—not too cold or too windy. But yet the air was crisp enough to keep the ice frozen. This made the walk along the river peaceful and serene. By the end of our trip, this walk was one of the most beautiful places we saw in Iceland. 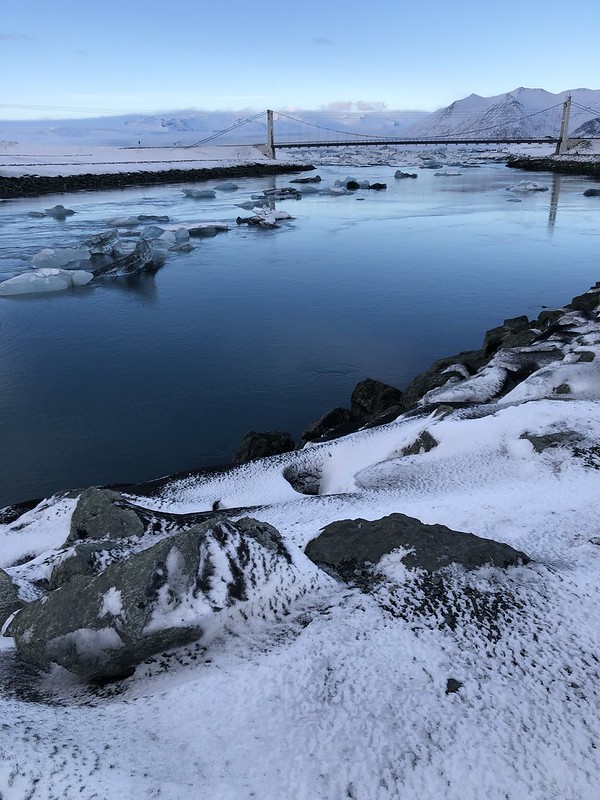 The Jökulsá river had lots of large floating icebergs 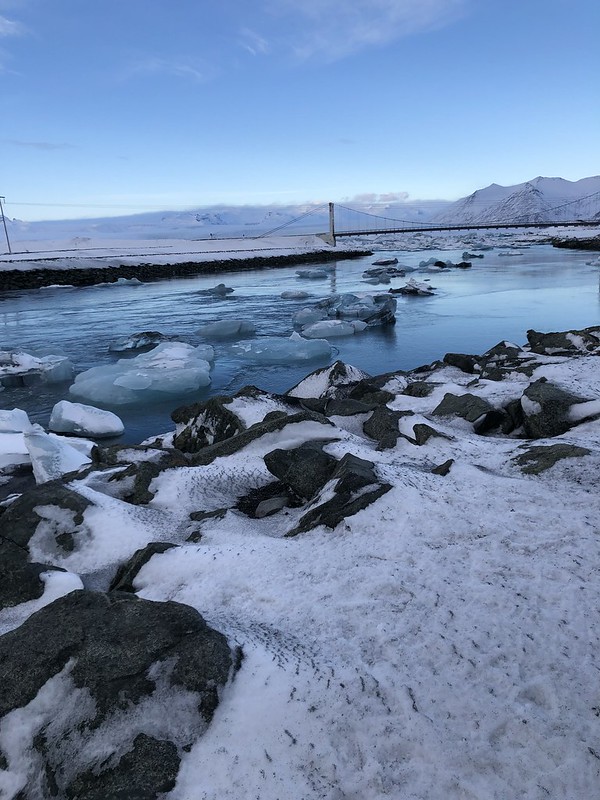 Even if you can reach the icebergs from shore, it's important not to climb on them... they're very slippery and dangerous 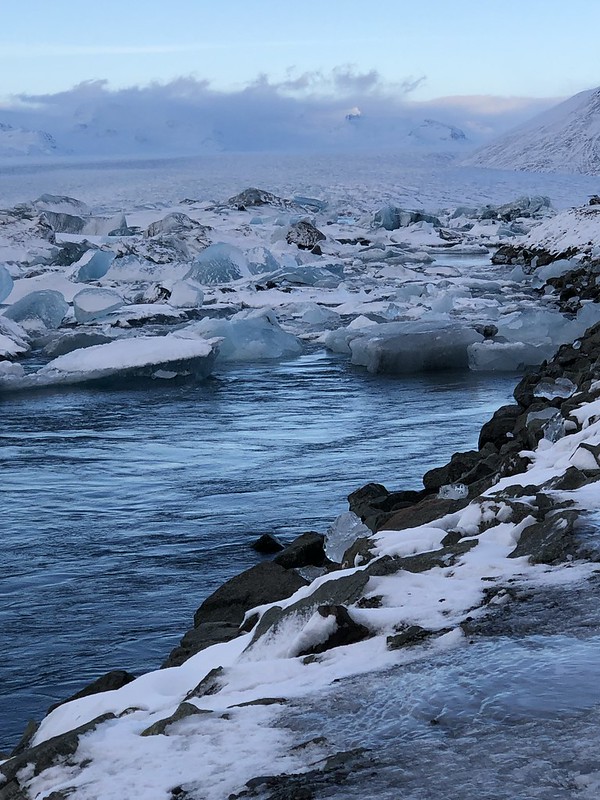 The black beaches and remnants of erupted volcanoes was a piece of Iceland that I was not expecting. For some reason, in all my excitement about Iceland, I failed to realize that Iceland is a volcanic island. But yet again, Iceland continued to amaze me with its beauty and educational opportunities. And these beaches and icy diamonds are even more reasons why I loved visiting Iceland, and why I wanted to share what I experienced.

Thanks for joining me for this piece of my Discovering Iceland collection, and please check back soon for our last (for now) installment about Iceland.